Posted on April 5, 2021 by lipstick socialist

He was born in Bolton in 1942,  but his mother died when he was five years old,  and  so Joe returned to Ireland to be brought up by his Aunt Kate and Uncle Tom in Ballybeg, Tullaughane, County Mayo.

His father stayed in Bolton working until Joe  was 15 when he  returned home.”I only knew him for a very brief time. I would have seen him every year for two weeks and he wrote every fortnight and sent me sixpence.”

Brutal treatment by the Franciscan Brothers led to Joe walking out of school when he was 13. “I told the brother that if he was to try and repeat the beating I would retaliate and so I walked out three months before I was due to finish school.”

Joe moved back to Bolton when he was 17. “The lack of job opportunities was the reason I had to leave. I was an economic migrant although that wasn’t the term used then.”

In the 1960s he played for Gaelic football team Shannon Rangers which provided a social life for many Irish emigrants. “It was a great saviour for many  Irish people. Some of the clubs would meet people coming off the boat train and they did tremendous work finding them accommodation and jobs.”

Life changed for Joe  forever when he had a serious accident on a railway line and lost both legs which were amputated above the knee. Through operations and his determination to walk again Joe mastered the use of prosthetic limbs. Joe was supported by his family and even a coach load of Manchester GAA supporters who turned up in his hospital ward. “Those visits had a magic effect in encouraging me to walk again.”

In 1972 he married Margaret Schofield. They had two children,  Bernadette and Nuala,  and also adopted Margaret’s two children from a previous relationship. Together they went on to encourage the Bolton Irish community to be proud of being Irish, and  not to be ashamed of challenging discrimination and disadvantage. 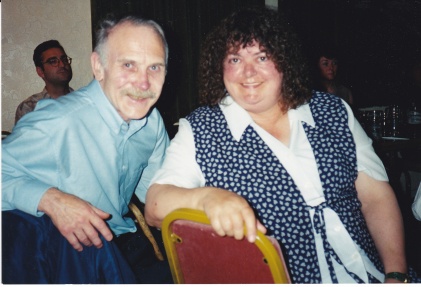 Events in the North of Ireland following the Northern Ireland Civil Rights campaign in 1969 reflected  back onto the Irish community in Britain. As Joe comments,  “The Irish community in Britain had no community structures that could cope with the aftermath of the 1974 Birmingham and Guildford pub bombings and the introduction of the Prevention of Terrorism Act (1974) that led to the conviction of the Birmingham 6, the Guildford 4 and the Maguire Family and other innocent people.”

Irish activists did respond in 1981 after the death of 10 young Irish men who were  on hunger strike  for the right to political status in the North of Ireland. Joe was one of the founder members of the IBRG. He says “to campaign and to represent the interests of the community in Culture, Education, Welfare, Repeal the Prevention of Terrorism Act, Anti-Irish racism, and political issues.”

Bolton IBRG had a membership of over 100 people with about 20 active on issues. They organised Irish language classes, as well as taking part in local multi-cultural festivals, starting an Irish radio programme, and  taking  their place on the Bolton Race Equality Council (BREC) and the Minorities Joint Consultative Council.

Joe  was  Chair of Bolton IBRG as well as national Vice President of IBRG and a member of the Ard Choiste ie the six weekly meetings of the organisation which took place at venues across the country.  He was also a shop steward in his workplace for thirty years.

Most IBRG branches had problems finding venues that would allow them to meet and Bolton was no different. After the 1974 Birmingham and Guildford pub bombings Irish pubs and clubs would not allow groups to meet that had any political agenda,  even though the actual event was a fundraiser for a football club.  Bolton IBRG challenged this and organised many  events including the first Bolton Irish Festival.

Bolton IBRG branch had difficulties finding an Irish club or pub that would allow them to meet monthly. In the end  the Socialist Club provided that venue and over the years supported IBRG as well as putting on their own events which highlighted human rights abuses in the North of Ireland.

Being Irish at this time was making a political statement. Joe and IBRG did not avoid the fact that Irish were in Britain because of the occupation of our country by the British over many centuries. IBRG policies were passed on Northern Ireland and the issue was taken up consistently over the years.

This memoir is important because it highlights how activists in IBRG were surveilled   and harassed for speaking out about Ireland and taking part in legitimate political activities.

It did not stop Joe, or other members of IBRG, in taking up issues including anti-Irish racism, the use and abuse of the P.T.A., and the human rights abuses that followed from the occupation of the North of Ireland by the British Government.

In 2002 Joe returned to Ireland for the second and last time. “Following the ceasefire and the various political changes, things improved for the Irish community, but I never felt that I belonged over there. I worked with English people, lived with them, was involved with them on a trade union and  community level but I never felt part of them.”

Joe’s story is part of the radical history of working class people in this country. It is a chapter in the history of the Irish in Britain who take their place in campaigning for a better society over here as well as challenging the role of the UK in the occupation of part of Ireland. It is an important story and one that can only inspire others to follow in his footsteps.

Bolton IBRG’s Minute Book and documents are now  part of the IBRG archive at the Working Class Movement Library  in Salford.

Contact Joe direct for a copy of his book at Joe@osb.ie. The cost is  £14.50 including postageto the UK

I am an activist and writer. My interests include women, class, culture and history. From an Irish in Britain background I am a republican and socialist. All my life I have been involved in community and trade union politics and I believe it is only through grass roots politics that we will get a better society. This is reflected in my writing, in my book Northern ReSisters Conversations with Radical Women and my involvement in the Mary Quaile Club. .If you want to contact me please use my gmail which is lipsticksocialist636
View all posts by lipstick socialist →
This entry was posted in Uncategorized and tagged Bolton IBRG, Bolton Irish in Britain Representation Group, Joe Mullarkey, Margaret Mullarkey. Bookmark the permalink.