Read my weekly roundup of radical arts and politics..Johnny Guitar,Dare to be Free, People before Profit and John McGahern

Johnny Guitar (Home). A classic film, looks like a western but isn’t. Made in 1954 by Nicholas Ray it reflects on US society at that time, McCarthyism and the witchhunt of radicals in society. Joan Crawford, 49, plays Vienna, the owner of a saloon, who is targeted by locals because of her friendship with a local gang. There is a strong feminist theme: Joan wears a gun and engages in a gunfight with rival Emma Small. It must be one of the few scenes in a western where the women get their hands on the guns! But it is more like an opera than a western; music and photography creating a highly volatile backdrop with Vienna at the centre, determined to get her man, face down the locals and challenge all opposition. Watch this trailer for a taste of the film see

to a play about Mary Quaile, a woman who also challenged the norms about what was acceptable behaviour for a woman in the early C20th. From a working class Irish background she left school at 12 and went on to spend a  lifetime encouraging women to join trade unions and fighting for better pay and conditions. In this new play, written by Jane McNulty, you can see how life has gone in  a circle for some women (and men). Fast food workers in 2016 might have  a better education and be more confident as women, but they are fighting the same fight as Mary.  In this play we learn about how Mary, alongside other women and men, changed society. It’s a play of hope for the future, reflecting on campaigns such as Hungry for Justice and the brilliant work done by trade unions such as BFAWU and Hotel Workers Unite. Next week there are two performances in Manchester and Glossop: see here for details 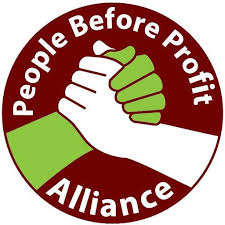 about the People Before Profit Party in Ireland.  They are part of The Anti Austerity Alliance movement which  opposes all austerity and actively campaigns to defend working class people. Most notably it has been active in the anti-water charges campaign in Ireland. This week it broke new ground by winning 2 seats in the Northern Ireland Assembly in previously safe republican areas of West Belfast and Derry. PBP prove that you can build a mass grassroots campaign against austerity, a lesson that needs to be learnt on this side of the Irish sea. Celeb politicians and Guardian writers will not deliver this mass movement but the people who are really experiencing job losses, homelessness and poverty. 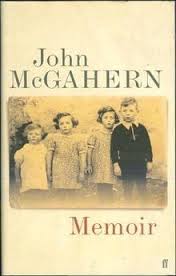 Memoir by  John McGahern. He is one of my favourite authors, for lots of reasons. His writing is superb, but it is his insight into the lives of Irish people that make his novels interesting to me. In this autobiography, written shortly before his death in 2006, we find out about the life of a man who is considered one of the greatest novelists of the C20th. He grew up in post independence Ireland, his father had been on the winning side, as a soldier in the IRA, some  of whom went on to to take positions of power in the country, although for John’s father it was as a rural guard (policeman). In Memoir, we see the effects on men (and fathers) in particular of living in a State that had, by John’s birth,  experienced many years of violence and war.  We also  find out about  John’s relationship with his mother and the effect of her early death on his life, which I think is reflected in his insightfulness towards female characters in his novels. All his books feature  wonderful descriptions of the countryside and  a respect for the  way of life of rural folk, a life that he left  to go  to Dublin and abroad,  but brought him back to write some of his most famous novels,  including Amongst Women and That They May Face the Rising Sun. Buy his books at

I am an activist and writer. My interests include women, class, culture and history. From an Irish in Britain background I am a republican and socialist. All my life I have been involved in community and trade union politics and I believe it is only through grass roots politics that we will get a better society. This is reflected in my writing, in my book Northern ReSisters Conversations with Radical Women and my involvement in the Mary Quaile Club. I am a member of the Manchester and Salford National Union of Journalists.If you want to contact me please use my gmail which is lipsticksocialist636
View all posts by lipstick socialist →
This entry was posted in anti-cuts, book review, Catholicism, drama, feminism, films, human rights, Ireland, Irish second generation, labour history, Manchester, novels, political women, Socialist Feminism, trade unions, women, working class history and tagged Hungry for Justice, Joan Crawford, Johhny Guitar, John McGahern, mary quaile, People before Profit. Bookmark the permalink.