Keep a diary for the day on 12 May and make your mark on history!

History is dominated by the establishment. In books, television and radio the agenda is one of kings and queens, the First and Second World Wars, and generally the people with power. Where are the people who made this country a democracy? Where are the Levellers, the Chartists, the trade unionists and the socialists?  Where are the stories of the women in many campaigns? Even a woman such as Mary Quaile, who had important positions in her trade union, the local Trades Council, and on the national TUC Council has until recently been forgotten.

On 12 May  we can change this perception of working class history: you can write up your diary for the day and it can become part of the Mass Observation Archive. Are you standing on a picket line outside a Job Centre as part of  a campaign against sanctions? Are you writing a flyer to tell people about the latest cuts to the NHS? Are you a care assistant on a zero hour contract?  These are all important stories and need to be included in any history of 12 May.

Mass-Observation was a  social research organisation founded in 1937,  by an eclectic group of people including anthropologist Tom Harrisson, poet Charles Madge and filmmaker Humphrey Jennings. It was funded by themselves, with the occasional donation and used volunteer correspondents.

Their  aim was to record everyday life in this country through inviting 500 untrained volunteers to keep a diary or reply to questionnaires. The weird aspect of it was that they paid investigators to record peoples conversations at work, in the street, in pubs or at public events including meetings, sporting and religious events. You don’t really need to do this nowadays as so many people use the social media as a way of constantly recording what they are doing and how they feel at any moment of the day! But what is not recorded ( or maybe it is by the State) is the real life of activists, which is important to record and promote as a vital  aspect of our democracy. 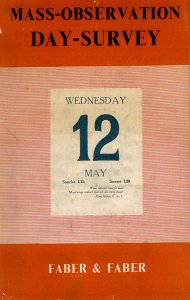 On 12 May 1937 they asked people from across the UK to record everything they did from when they woke up in the morning to when they went to bed at night. This date was chosen because it was the day of George VI’s coronation. And that is why this year we need to submit diaries of real people to ensure that when people look back on 12 May 2016 it gives a view of the real lives of people in this country.

So how do you contribute?  Click on this link see

I am an activist and writer. My interests include women, class, culture and history. From an Irish in Britain background I am a republican and socialist. All my life I have been involved in community and trade union politics and I believe it is only through grass roots politics that we will get a better society. This is reflected in my writing, in my book Northern ReSisters Conversations with Radical Women and my involvement in the Mary Quaile Club. .If you want to contact me please use my gmail which is lipsticksocialist636
View all posts by lipstick socialist →
This entry was posted in anti-cuts, education, feminism, labour history, political women, Uncategorized and tagged mary quaile, Mass Observation Project. Bookmark the permalink.

1 Response to Keep a diary for the day on 12 May and make your mark on history!