Posted on November 28, 2021 by lipstick socialist

In April 1999 Unison asked the Centre for Public Services to  report on what had gone wrong in the privatisation of Tameside Labour Council’s elderly care services.

They summed it up: ““This report shows a catalogue of mismanagement of a key service to vulnerable, elderly people. Tameside MBC created the worst of both worlds – it established a trust (Tameside Community Care Trust) and hived off its residential care services into the Trust’s subsidiary company  – Tameside Enterprises Limited  – which subsequently became Tameside Care Group. But the council then mismanaged this structure through political appointments, poor management, weak financial controls and lack of transparency.”

Tameside, a  Labour  Council, was the first  local authority in Britain  to privatise its residential care services in 1989 when it transferred 12 of its elderly persons homes in Tameside (450 beds) and 8 homes in Stockport  to a private company: Tameside Enterprises Limited. (TEL). The Council owned one-sixth of the new company, while  the leader of the Council, Roy Oldham,  attended board meetings until 1995.

Tameside Community Care Trust owned the other five shares. The Trustees of this company included  local Members of Parliament, Andrew Bennett and Tom Pendry,  and the local Member of the European Parliament  Glynn Ford.

The Tory Government at the time was encouraging local authorities to privatise services and  increased funding was available if homes were private rather than council owned.

The story  of Tameside Care Trust shows a blatant disregard for the needs of the elderly people in their care, the exploitation of a largely female and low paid workforce and a lack of accountability of public money. Unfortunately most of the unions, as well as the local Labour Party, MPs and MEPs went along with the privatisation agenda.

Right from the beginning of TEL the conflict of interest between the Council and the people appointed to run the new organisation was transparent – but no one challenged it.

TEL appointed the Council’s Director of Policy Paul Stonier as its Chief Executive, who  was also the husband of Shirley Stonier,  a Labour councillor om Tameside Council. .

Paul Stonier was also a member of the National Union of Public Employees and  sponsored by them as a   prospective Labour Parliamentary candidate for Littleborough and Saddleworth. Labour Councillor Simon Walker was appointed as its head of Finance. Margaret Oldham, wife of the leader of the Council, was  appointed to take TEL through quality assurance certification for TEL and given £10,000 to do so.

The National Union of Public Employees (NUPE)   was given  a single union agreement with the new organisation,  thereby excluding the other unions from any  recognition.  Documents in the archive contain  allegations that NUPE members were not properly informed of the transfer details and that they were called to union meetings without being fully aware that they were going to be asked to vote on important changes to their working conditions.

Tameside is a borough on the eastern edge of Greater Manchestermae up of  nine towns  and, although there are some wealthy areas,  it  had  and still has  many poor households. Many working class women worked in the care industry – one not known for above average wages or decent working conditions.

By April 1992 the  accounts show that TEL was insolvent.  They then  asked Tameside Council for a loan but instead  Tameside Council (who saw themselves as “landlords” ) gave £430,000 to TEL for structural improvements,  not a loan.

The management turned to the staff to save £500,000 by cutting sick pay and holiday pay. Staff refused to accept cuts and a were angry that they were not covered by a “no redundancy” policy. Stonier responded byissuing  a 90 days’ notice to staff for  a new and worse contract unless they agreed to the cuts.

NUPE responded by calling for TEL’s accounts to be inspected and for  the management to resign. In December  1992 20% cuts were imposed by the management on all staff and Unison  (who were  a new union that included NUPE)  responded by serving writs on TEL and called for the resignation of the Labour leaders.

In April 1993 Stonier was given a 43% pay rise evn though  TEL finances were found to be irregular, included faulty bookkeeping, : the auditor refused to sign the 1991/2 accounts.

Seven Labour councillors voted against the TEL cuts and were  then removed from the Labour group. The  North West Regional Labour Party later  reinstated them.

In June 1993 the police were called in to investigate TEL. Stonier was sacked for gross misconduct,  while  Head of Finance and Labour Councillor Simon Walker resigned.

Tameside Labour Council with the Cooperative Bank set up an emergency aid package and the Tameside Community Care Trust was created in September 1994.

Immediately staff were removed from national conditions and cuts of 10% in pay, shift pay and sickness payments were  instituted. Pay for the care workers had not increased since 1993. Unison lodged a pay claim for workers as the TCG announced a profit of £750,000.

On New Year’s Eve 1997 Unison were called to a meeting and the management,  instead of discussing pay rises,  offered   new contracts for staff with more cuts to pay, fewer holidays, lower pay for working Bank Holidays and the removal of all sick pay.  They then issued a 90 day notice to chnage  their contracts.

On 30 March 1998 , following a strike ballot, 200 carers went  on strike against the cuts. The management responded  by bringing in “scab” workers to whom they paid a higher rate and  used taxis to ferry them back and forth to work.  In response  the  strikers  picketed and occupied the offices of two of these agencies, against the advice of the Unison Branch Secretary;  the agencies then  withdrew from the contract.

On 3 June 1998 the carers refused to sign the new contracts and were  informed that they were  sacked.  They   went on  indefinite strike.  90% of the strikers were women and many of them were single parents. They led the strike.

In an interview in Schnews July 1998 one of the strikers summed up their feelings:

“For the past 16 years the leader of Tameside has been Roy Oldham and he has got a finger in every pie. We had a public meeting last week and invited all the Labour Councillors but not one turned up. They put off sacking us until after the May localelections, where only one in five of Tameside voted, which I think tells you something about what people think of their local council!”

A strike committee was set up by Unison,  but it is clear from the Minutes and actions that the women ran the campaign with great support from the local community. Unfortunately Unison never broadened the strike to include Unison members in Tameside Council who carried on servicing the care homes.

An independent  support group for the strike was also set up in Manchester which the local Unison Branch Secretary was not keen on; he said it might “bring the strike into disrepute if linked with other actions.” But this was disregarded by the strikers. Martin Ralph of the group produced a pamphlet on the dispute “Support Tameside care workers: good wages, conditions and care are indivisible ” which is in the archive at the WCML.

Whilst locally, Labour MP’s deserted the women strikers, nationally left wing MPs including  Ken Livingstone, Tony Benn and Jeremy Corbyn supported them. Jeremy Corbyn organised a meeting with them at the 1998 Labour conference.

Apart from the usual activities of a strike which include demonstrations through the centre of Tameside, linking up with other strikes going on at the same time,  there are some really funny incidents that are documented. One day two of the strikers, Rose and Hazel, noticed the leader of Tameside Council Roy Oldham going for lunch. They decided to join him at his table and they started a discussion about the strike. 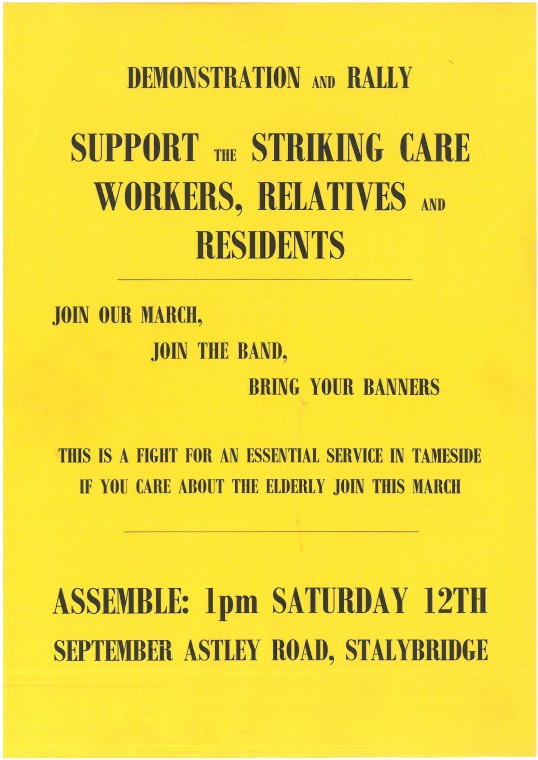 The striking carers were supported not just by local people in Tameside but the relatives of the elderly residents who organised a meeting at a local hotel to discuss their concerns.

Strikers set up pickets at the care homes operating on a daily basis from 630 a.m. to 11pm. Collections for the strikers took  place in local shopping centres. Letters of solidarity were sent to the strikers as well as information about what was happening in the care homes.

Unusual for any strike is support from a local Conservative Association but on 13 May the Ashton-under-Lyne branch wrote to Alan Firth, Managing Director of the TCG to register their concerns. They also send a donation to the Strike Fund.

Financial support for the strikers was raised by socials with radical singer Clare Mooney.  On International Women’s Day  a solidarity benefit was held at the Chorlton Irish Centre.

Banner Theatre and local singer Bernie Murphy took part in socials locally to raise the spirits of the carers and fill up the strike fund.

On December 6 a radical history walk around Manchester was organised and run by Ruth Frow  and Michael Herbert of the Working Class Movement Library   in aid of the Tameside Care Workers.

A preliminary hearing of the Industrial Tribunal took place at which the TCG’s Managing Director Alan Firth finally admitted that the Company was still owned by Tameside Council. The Tribunal unaminously agreed that the workers were sacked before they went on strike and did have a case for unfair dismissal and a date for the  full hearing of the Tribunal was set.

But this did not stop the Labour Council two months later taking out half page advertisements in the local press to say it did not own or control the Company.

One of the strikers’ son produced a Xmas card for sale with the slogan “Enough is Enough”: 1000 were sold and the money donated to the strike fund. During the period of the strike the Hardship Fund for the strikers raised  over £263,000  from Unison branches, members and the wider Labour movement.

On 20 May strikers ended industrial action and  most accepted a settlement by Tameside Council. But  18 strikers refused the settlement and instead took their case for unfair dismissal to an Employment Tribunal.  They wanted to highlight the conditions for workers and residents in the homes. But the Tribunal voted against the strikers and made no criticism of Tameside Care Group.

Unison called on the Audit Commission to conduct an inquiry into the financial affairs and management of the Tameside Care Group. They also called on Tameside Council to conduct a wide ranging review of the future of residential care provision and operate within a “Best Value” framework as recommended by  the  (Labour) Government.

Locally the newspapers covered what turned into a national controversy over the Labour council, elderly care home residents and a strike of angry and determined women workers. A documentary was made about the strike as the strikers took their dispute up and down the country at meetings and demonstrations.

Today it is new  and independent unions such as the United Voices of the World that are taking on care homes who are offering inadequate pay to care workers. They have just won at  Sage nursing homes in London. Find out more here

I am an activist and writer. My interests include women, class, culture and history. From an Irish in Britain background I am a republican and socialist. All my life I have been involved in community and trade union politics and I believe it is only through grass roots politics that we will get a better society. This is reflected in my writing, in my book Northern ReSisters Conversations with Radical Women and my involvement in the Mary Quaile Club. .If you want to contact me please use my gmail which is lipsticksocialist636
View all posts by lipstick socialist →
This entry was posted in Uncategorized and tagged Andrew Bennett MP, Banner Theatre, Claire Moosney, Glyn Forde MEP, Jeremy Corbyn, National Union of Public Employees, National Union of Teachers, Roy Oldham, Tameside Care Workers Dspute, Tameside Labour Council, Tom Pendry MP, unison, United Voices of the World. Bookmark the permalink.

1 Response to Enough is Enough: The Tameside Care Workers Dispute 1998-99