Posted on October 28, 2020 by lipstick socialist 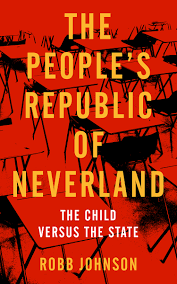 Books should be written by activists. Not by academics. Not by political commentators. Robb is a political songwriter whose day job is as a teacher. In this brilliant and inspiring book he reflects on his life on the frontline of the education system and the right-wing revolution that has taken place in our schools since the 1980s. He asserts ; “The state’s strategies of competition, outcomes and selection support the existence of a system of social privilege that not only serves the particular interests of the ruling elite but also creates a culture of stress and anxiety.”

Giving working class children the right to a free education was not altruistic in the 1870s. It was driven by the demands of the Industrial Revolution – the economy needed workers with some reading and writing skills. Over the years Governments have tried to shape children and  the education system according to their political ideology.

Robb became a teacher in 1980 and throughout his time in the job he has seen at first hand the way in which the education system has become the target of the right wing from Thatcher to Blair to Cameron to Johnson.  He says that the post war period and the role of educationalists meant that the underprivileged child benefitted from an agenda of libertarianism, of a child centred approach and of the concept of equality.

But this is not a depressing book. Robb reminds us of how education has always been a minefield of debate and argument – even well before the 1980s.

In the 1970s teacher Chris Searle was sacked from his job at a teacher at a  Church of England  School because he published a book of poems by his working class students.  Supported by his students  who went on strike ((as well as  parents and the N.U.T.), Searle got his job back, and continued his work to “attempt to develop, through imaginative writing, the generous, empathetic and fraternal instincts of these children.”

Robb was lucky to be in education when educating the teacher, in its broadest sense, was seen as an important part of the job. In 1987 he went to East Berlin as part of a formal delegation of teachers. He chose to visit a kindergarten and it was a wake up call to him. “If you want to improve “our children”, improve the start they get to their learning by making it more like the experience of those children who go to children’s gardens till they are six or seven in “those countries” where “children do better”.

One of the inspiring aspects to this book is the way that Robb has learnt from other teachers or educationalists, as well as children,  and applied  that in his own practice. He has worked mainly  in schools where there are children who are deprived. In one school he used his song writing skills to write a song about them which would stop the kids punching each other. (The song is in the book. “6B go swimming”. )

He makes his case through using poetry, song and philosophy to sit alongside his own story and that of this country’s education system. The text is littered with my heroes/heroines Emma Goldman, Adrian Mitchell, Roger McGough and Billy (William)  Blake. Also I love his songs which are an important part of the story.

It is an intense, often depressing, often heartbreaking, often very funny hike through the history of this country over the last century. It is a great book for anyone who cares about the path that this country is now undertaking. It is an inspiring  book for anyone who wants to be a teacher or  work in any of the support services in schools. It will remind you of that great teacher that you still remember who always took time to listen to you or just give you a smile first thing on a Monday morning. It is a reminder of how important education is to social progress and to the future of this country. Over to Robb….

“In their exam factories, they try to stop up the ears and the eyes and the mouths of learning and questioning with “Right Answers”, like they would hold back the very hands of time.

And it hasn’t worked. It doesn’t work.

Our task is to let the clocks run forward again”.

The book finishes with a playlist of Robb’s Greatest Works, he also regularly tours, find out more here.

I am an activist and writer. My interests include women, class, culture and history. From an Irish in Britain background I am a republican and socialist. All my life I have been involved in community and trade union politics and I believe it is only through grass roots politics that we will get a better society. This is reflected in my writing, in my book Northern ReSisters Conversations with Radical Women and my involvement in the Mary Quaile Club. .If you want to contact me please use my gmail which is lipsticksocialist636
View all posts by lipstick socialist →
This entry was posted in Uncategorized. Bookmark the permalink.