My review of “A Collective Bargain. Unions, Organizing, and the Fight for Democracy” Jane McAlevey 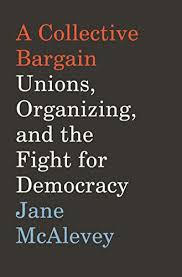 There are three reasons why I like this book.

One; it’s written by an activist. There are too many books being published by people who want to preach about what we should but do little beyond that. Give me people who actually make a difference.

Two:  it reminds readers in Europe that the USA is not Trumpland but is a society with a radical trade union history – past and present.

Three; it’s an inspiring book. Jane has a history of activism and she highlights many individuals and groups of workers who are on the frontline of defending their jobs and conditions –and particularly the  women and black workers who are a significant part of the American labour market.

At the heart of this book is the belief that unions are the only effective response to the destruction of democracy by the super rich corporations. Trade unions have existed as long as the USA has,  but it was in 1935 that they really became part of the social fabric of society. The depression of the 1930s was brought about by the capitalist class and, as Jane explains,  the response was :  “Congress passed the National Labor Relations Act (NLRA) which guaranteed workers the right to collective bargaining –the right to negotiate wages and other terms of employment – and created one national legal framework for unions in the private sector.”

Trade unions now existed to balance up the power structure within society. Jane goes on to prove the point that trade unions are an important institution in the  democractic process in the USA. but  once unions were challenging the power of the market the backlash came and,  as she points out,  the decline of unions is directly, in the USA, related to the growth of the union busting industry. As she says; “My firm belief that only strong, democratic unions can get us out of the myriad crises engulfing the United States, and large parts of the world, is based on my twenty five years as an organiser in the field, running and winning hard campaigns.”

Some of the most interesting parts of the books are  Jane’s own experience as an organiser. One of her early experiences, in 1991, when she was hired to do some preparatory work for the arrival of a delegation of interfaith leaders to take a tour of the US-Mexico border as part of a faith-based conference on conditions in the maquiladora zone. She observed that,  as early as the 1960s in Mexico,  the globalisation process was already underway, as  well-known US companies including GM, Ford and IBM had set up there and were paying poverty wages, the corporations benefitted from less regulation whilst making big profits and  were destroying the environment. There is no way American workers could compete.

In this book Jane shows how it is through unions that people can claw back power from global industries and improve their lives and their environments. The book is a instruction manual  not just on why workers need unions but  has some important examples of how they can go about it.

Just like the UK some of the most important strikes are being led by women as women dominate some of the biggest industries including health, education and hospitality. The power of the union to combat racism and sexism is shown in a case in Philadelphia in 2016 when Jane was a chief negotiator in contract talks between a thousand nurses and their employer.

One of the nurses involved was Marie Celestine, a black nurse who had worked in the hospital for forty years,  and was respected by  her colleagues and patients. Through the union Marie found out that for  over the forty years she had been paid thousands of dollars less than her mostly white juniors. As she comments “I’ve been denied the merit raises for most of my entire lifetime at this hospital.” Racism was the only explanation for her being denied pay equality.

Taking a leader role in the  collective bargaining process Marie won a fair and equal wage scale, eliminated the abusive merit system,  ended racial inequalities and gained 100 percent equality between women and men. This case is a reminder, as Jane comments; “Today, with women dominated fields growing, including societally urgent ones such as home health care, the future of the union movement is even more so the future of the women’s movement. If only women will unite, together.”

Jane has devoted her life to organising within the trade union and labour movement. She knows that unions can and do win and that central to that is organisation and building a movement that will challenge corporate domination of our lives. This book  is essentially about the American experience but there are many comparisons that can be made with our lives in the UK.

Over here we have seen the rise of new trade unions such as United Voices of the World which are more democratic and which have encouraged and supported their members to fight and win better pay and conditions. Groups such as the Angry Workers Collective are inspiring in taking the struggle to some of the big battlegrounds such as the food industry and their  communities to show that trade unions and organising are about more than just pay and conditions.

And as Jane says; “Good unions point us in the direction we need to go and produce the solidarity and unity desperately needed to win. We can fight, and we can win.”

Buy it, it costs £20 from the real Amazons here

I am an activist and writer. My interests include women, class, culture and history. From an Irish in Britain background I am a republican and socialist. All my life I have been involved in community and trade union politics and I believe it is only through grass roots politics that we will get a better society. This is reflected in my writing, in my book Northern ReSisters Conversations with Radical Women and my involvement in the Mary Quaile Club. .If you want to contact me please use my gmail which is lipsticksocialist636
View all posts by lipstick socialist →
This entry was posted in anti-cuts, book review, Communism, education, feminism, human rights, labour history, political women, Socialism, Socialist Feminism, trade unions, Uncategorized, women, working class history, young people and tagged Jane McAlevey, USA.. Bookmark the permalink.

3 Responses to My review of “A Collective Bargain. Unions, Organizing, and the Fight for Democracy” Jane McAlevey