For Ade Mormech the political is personal . He, alongside other Manchester Palestine  Action  activists, recently  occupied the roof of Elbit’s Ferranti factory in Waterhead Oldham  for three days. “We think that arms companies like Elbit Ferranti should stop operating when it is clear their weapons are being developed through the mass murder of Palestinians in Gaza and the rest of Palestine. The crimes must stop and so must UK-based companies that are profiting from them.”

Mormech  was a teacher in a school in  Gaza for two years.”I saw many children die in the hospitals from the kinds of weapons produced here during the ‘Pillar of Cloud’ attacks in 2012. One of my students was killed with her two young children in 2014 so I know a small part of the loss that  the Palestinians must be feeling. We’re trying to keep this factory shut so they can’t make things which kill innocent civilians.”

The activists began their  protest on 1st July at 5am at the time of the five-year anniversary of Israel’s 51-day bombing of Gaza in the summer of 2014. They dropped large banners off the front of the building stating “UK Stop Arming Israel” and others describing the killings in 2014 and the shooting of thousands of Palestinian protesters in the Great Return March this past year.

Campaigners are targeting the Elbit-owned factory because  Elbit is the largest Israeli weapons producer,  best known for their unmanned aircraft systems (“UAS”) or drones, which include the military drones Hermes 900 and Hermes 450 which were employed extensively during the 51-day attack on Gaza in 2014. The company itself  describe their drones as the “backbone” of Israel’s drone fleet. The protesters accuse the weapons giant of developing weaponry through their use on the Palestinian population, selling them as “battle-tested.”

Elbit Systems has four subsidiaries in the UK; UAV Engines, Instro Precision, Ferranti Technologies and Elite KL. All have faced protests in recent years: the UAV Engines Factory in Shenstone was closed for nearly three days when it was similarly occupied in 2014.

Figures from the Campaign Against Arms Trade reveal that in 2017 the UK issued £221m worth of arms licences to defence companies exporting to Israel. This made Israel the UK’s eighth largest market for UK arms companies, a huge increase on the previous year’s figure of £86m, itself a substantial rise on the £20m worth of arms licensed in 2015. In total, over the past five years, Israel has bought more than £350m worth of UK military hardware.

Closing any factory in Oldham is controversial. Oldham is a low wage, low skill town.  Situated nine miles outside Manchester its heyday as the centre of the cotton trade is long gone. In 2016 the ONS named it as one of the most deprived towns in the UK.

Walking around the town centre it is obvious how the local Labour Council have spent millions on improving its buildings,  adding new ones like the cinema, hoping that  the advent of the tram may bring more people to the centre.

Outside the centre of Oldham, however,  there is a different story. New research by  End Child Poverty shows that more than 26,000 children in Oldham are living in poverty, making it the fifth worst town in the North West for child deprivation. The report  highlighted three areas of Oldham .Werneth where  66.2% of children live in poverty. St.Mary’s was one of the UK’s twenty wards with a rate of child poverty at 61.8% and Coldhurst not far behind at 60.9%.

MPA’s strategy of closing down a factory which offers 200 skilled engineering jobs doesn’t sound like a prospect that locals would support,  but Mormech challenges this. “At our street meetings we have met with support for our campaign.  And during the three  days of action at Elbit’s the local community came down to support us listening to speeches and bringing food.”

Their strategy is not just about a local factory but of closing down the arms trade between Britain and Israel. He points to the recent ruling by the Court of Appeal that UK arms sales to Saudi Arabia for use in Yemen are unlawful.

Mormech says that the protests in Oldham will continue “We’re trying to keep this factory shut so they can’t make things which kill innocent civilians. We demand a two-way arms Embargo between the UK and Israel so that no more deaths can be inflicted on the Palestinian people that the UK or Israeli government can profit from.”

Recently a statue to local working class suffragette Annie Kenney was unveiled in Oldham. Jim McMahon, Oldham West and Royton Labour  MP, and chair of the Annie Kenney Memorial Fund, called her a “working class hero”. He was quoted as saying,  “The message that they hopefully will take from today is that the battles for fairness, for equality, to tackle injustice when you see it is a responsibility of every generation. Annie stepped up in her day and it’s for everybody to step up today”. 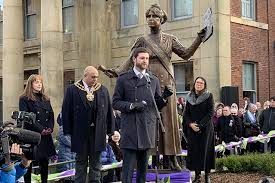 Jim McMahon and his call for action

However so far Jim McMahon has  failed to step up by  responding to my email asking for a comment about the Elbit Ferranti protest. Other Oldham MP’s and  the Leader of Oldham Council were also contacted for comments about the protests but failed to respond before publication.

I am an activist and writer. My interests include women, class, culture and history. From an Irish in Britain background I am a republican and socialist. All my life I have been involved in community and trade union politics and I believe it is only through grass roots politics that we will get a better society. This is reflected in my writing, in my book Northern ReSisters Conversations with Radical Women and my involvement in the Mary Quaile Club. .If you want to contact me please use my gmail which is lipsticksocialist636
View all posts by lipstick socialist →
This entry was posted in education, human rights, labour history, Palestine, Uncategorized and tagged Annie Kenney, Manchester Palestine Action, oldham. Bookmark the permalink.