My interview with Sheila Rowbotham about her groundbreaking 1969 article “Women: the struggle for Freedom”

Posted on January 14, 2019 by lipstick socialist

On 10 January 1969 in an article  called   “Women; the struggle for Freedom”, published  in the Marxist magazine Black Dwarf, socialist feminist Sheila Rowbotham  poured out her anger and resentment about the inequality and injustice of women’s lives:   “A much less tangible something – a smouldering, bewildered consciousness with no shape – a muttered dissatisfaction – which suddenly shoots to the surface and EXPLODES.”

Sheila  lived in a communal house  in London, worked part -time teaching at a local F.E. college, and was involved with socialist politics.  But she saw  her male comrades as  part of the problem. “They, like the left generally then, treated women with derision when we spoke up about how we felt about our lives,” she told me when I spoke to her.   This came to a head when she became involved in producing an issue on women’s issues for “Black Dwarf”.

Sheila  remembers that when her  male  comrades tried to make out that it was her that was the problem, not all women, the 17 year old secretary, Ann Scott, spoke up:  “It’s not just Sheila, it’s all women.”

As Sheila  explained to men in the article: “We still get less pay for the same work as you. We are still less likely to get jobs which are at all meaningful in which we have any responsibility. We are less likely to be educated, less likely to be unionised. The present setup of the family puts great strain on us.” Sheila was part of a minority of women that had got to Oxford, but it was not an easy position to be in. “The girl who for some reason breaks away intellectually is in a peculiarly isolated position. In the process of becoming interested in ideas she finds herself to some extent cut off from other girls and inclines naturally towards boys as friends.”

In the 1960s everything was changing. Civil rights movements across the world were kicking off and there was a widespread belief that things would change dramatically.  Rowbotham was researching women’s history,  finding links with the writings of women such as Alexandra Kollontai, who in the early days of the Bolshevik Revolution  drew the links between the personal and the political.

Whilst some women were still intellectualising about feminism, working class women such as Lil Bilocca and the Hull fishermen’s wives in 1968  were defending the lives of their men at work on trawlers.  As Sheila recognised,  “It was unusual to see a woman fighting publicly and speaking, and men on the left listening with respect, tinged admittedly with a touch of patronage.”

At the same time as some women, mainly   middle class, were taking part in workshops, conferences,  and setting up the first  Women’s Liberation groups, there was a parallel movement of women activists in their workplaces. The women at Ford’s in Dagenham, led by Rose Boland,  showed   that women could organise themselves and take strike action. It also had a ripple effect on the left. “The Ford’s women also helped make the question of women’s specific oppression easier to discuss on the Left” says Sheila.

Women’s groups spread across the country,  culminating in  February 1970 when  where  the first nationwide meeting took place at Ruskin College Oxford. Sheila  was amazed at the response. “We thought perhaps a hundred women would come. In fact more than 500 people turned up, 400 women, 60 children and 40 men…it was really from the Oxford conference that movement could be said to exist.” They settled on four demands to begin with: equal pay, improved education,  24  hour nurseries,  and free contraception and abortion on demand.

For Sheila  it was not all analysis. In  1971 she was involved with the Hackney Women’s Liberation Workshop and the night cleaners campaign. They were a very badly treated group of women workers. May Hobbs was one of the central activists as Sheila comments:  “May Hobbs came to my bed room to speak about the cleaners and various people came from London Women’s Liberation Workshop to hear her in autumn 1970. There were certainly not crowds volunteering to leaflet in the city at night! Partly because women were busy campaigning for nurseries, contraception abortion- issues that related more to their immediate lives and it was not possible anyway for women with children to go out at night. Those of us who volunteered tended to assume that if we recruited women the union would support us.” 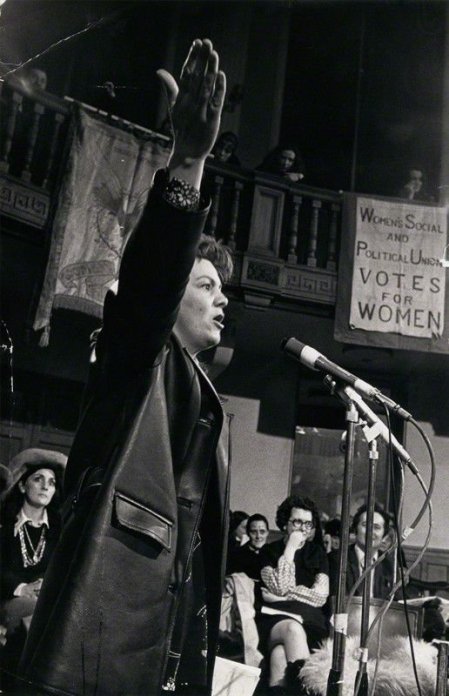 May Hobbs of Nightcleaners Campaign

Over the last fifty years much has changed for women in this country. But Sheila comments that few people now talk about an alternative vision for society, and  that while race and gender are dominant issues,  class has been  marginalised.  “Inequality has increased. Women have been pushed down and working class women pushed down even more.”  She believes that the values of the left in the 1960s,  which were about solidarity and caring have been replaced with ideas of individual rights  rather than ones of collectivity and the possibility of   creating a different society.

You can read the whole of Sheila’s article here.

Verso are republishing Sheila’s autobiography   Promise of a Dream; Remembering the Sixties in July  2019.

I am an activist and writer. My interests include women, class, culture and history. From an Irish in Britain background I am a republican and socialist. All my life I have been involved in community and trade union politics and I believe it is only through grass roots politics that we will get a better society. This is reflected in my writing, in my book Northern ReSisters Conversations with Radical Women and my involvement in the Mary Quaile Club. I am a member of the Manchester and Salford National Union of Journalists.If you want to contact me please use my gmail which is lipsticksocialist636
View all posts by lipstick socialist →
This entry was posted in biography, Communism, education, feminism, human rights, labour history, political women, Socialist Feminism, Uncategorized and tagged Black Dwarf, Ford Women strikers, Lil Bilocca, May Hobbs, Nightcleaners Campaign, Promise of a Dream; Remembering the Sixties., Rose Boland, sheila rowbotham, Women's Liberation Movement. Bookmark the permalink.

2 Responses to My interview with Sheila Rowbotham about her groundbreaking 1969 article “Women: the struggle for Freedom”