IBRG Archive at the WCML. Out of Ireland. Six Irish Film Festivals 1988-93

Posted on November 13, 2018 by lipstick socialist 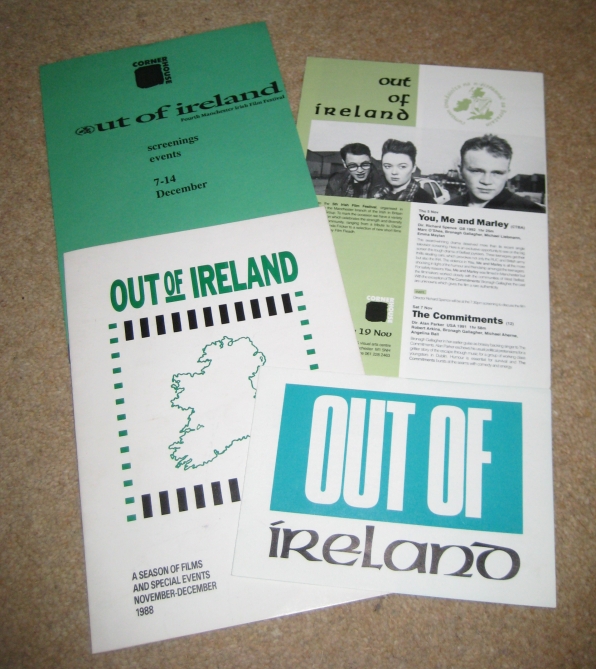 Out of Ireland was the name given to six Irish Film Festivals that were initiated by the Manchester branch of the Irish in Britain Representation Group  and organised  from 1988 to 1993 with the Irish in Manchester History Group and in collaboration with  the  Cornerhouse Film Centre.

Bernadette Hyland, secretary of Manchester IBRG, explained that “The aim of the Festival was to explore the image and experiences of the Irish through film and video and to look at the way in which Irish groups themselves can control this medium.” An important aspect of the Festivals was exploring contemporary social and political issues through the uses of day schools and speakers.

The Festivals were groundbreaking in raising issues that no other Irish group in Manchester were prepared to raise at this time. This included identity, the experiences of Irish women and second generation Irish young people, the conflict in Ireland and media censorship. 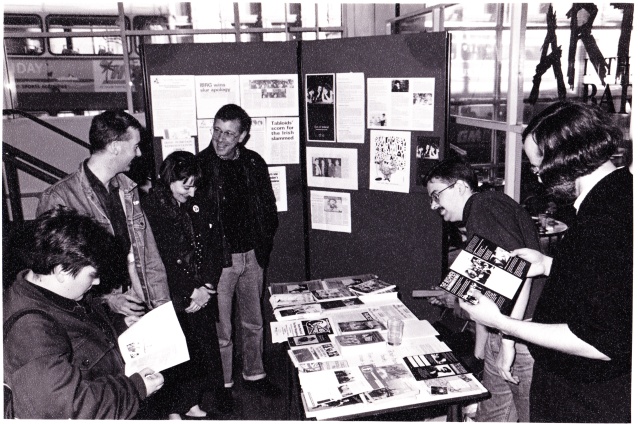 In the first Film Festival one of the most controversial documentaries, at this time, about the conflict in Ireland “The Cause of Ireland” was shown.  This was followed by a screening of Pat Murphy’s “Maeve” exploring issues about feminism and Irish identity.

Two day schools took place exploring the history of the Irish in Manchester with socialist  historian Michael  Herbert and Pat Reynolds, IBRG National P.R.O. who explained his involvement in the use of video to document the lives of the Irish in Britain.  Videos by the Irish Video Project were shown.

Manchester IBRG were keen to promote the specific experiences of Irish women at events and the Irish Film Festival was no different. An Irish Women’s Day took place which included speakers Marie McAdam and Joanne O’Brien authors of the classic history of Irish women’s experiences in Britain “Across the Water.” Afternoon screenings concentrated on women in the North of Ireland and included films on subjects such as poverty and strip searching.

Not unusual for this period of history a free crèche was made available to women taking part. Tickets prices for the films and dayschools  were kept low at £4/2.

Censorship of events relating to the North of Ireland which included indirectly affecting groups such as IBRG who wanted an open debate on the British government’s involvement was a prevailing theme in the Festivals. In 1990, at the third Festival, a session called “Ireland As Not Seen On T.V.” included films that had never been broadcast on British television and which under the Broadcasting Ban, which existed 1988-94, could not be screened under the legislation.

Filmmaker Philip  Donnellan took part showing his iconic “The Irishmen” which celebrated the contribution that the Irish had made to building the UK and became part of an important discussion in the Irish community and the politics of emigration. Philip and his wife Jill went onto play an important role in the miscarriage of justice case of Kate Magee from Derby in 1994. They stood bail for this single parent Irish woman and  Jill produced a beautiful banner which was displayed outside the court during Kate’s trial.

The Festivals gave the opportunity to explore issues of Protestant identity which were often ignored in the mainstream Irish community. In the Fourth IFF writer Christine Reid and journalist Cherry Smthe discussed what it meant to be from Irish protestant backgrounds. The film “Ascendancy” was also shown.

1993 was the sixth and final IFF which marked the 25 anniversary of the Civil Rights Movement in the North of Ireland  with a speaker from Derry, community activist Mary Neilis.

The IFF also showed many not so controversial films including  “The Commitments”,  hosted a tribute to Irish actor Brenda Fricker, films by acclaimed Irish film maker Thaddeus O’Sullivan, and new adaptations of iconic plays including Brian Desmond Hurst’s take on “Playboy of the Western World.”

Strong support from Sandra Hebron, Screenings Officer, at Cornerhouse,  ensured that the IFF were a success. The Festivals were financially supported by local arts organisations, Manchester City Council, local media and national newspaper “The Irish Post”.

The IBRG archive includes the programmes for the IFF, as well as posters, press cuttings. Some of the videos shown are included in the archive.

Philip Donnellan’s “The Irishmen” is being shown at Home on 27 November.

I am an activist and writer. My interests include women, class, culture and history. From an Irish in Britain background I am a republican and socialist. All my life I have been involved in community and trade union politics and I believe it is only through grass roots politics that we will get a better society. This is reflected in my writing, in my book Northern ReSisters Conversations with Radical Women and my involvement in the Mary Quaile Club. .If you want to contact me please use my gmail which is lipsticksocialist636
View all posts by lipstick socialist →
This entry was posted in Catholicism, drama, education, feminism, films, human rights, Ireland, Irish second generation, labour history, Manchester, North of Ireland, political women, trade unions, TV drama, Uncategorized, women, working class history, young people and tagged cornerhouse manchester, FIrish Film Festivals, Irish in Britain Representation Group, Kate Magee, Philip Donnellan. Bookmark the permalink.

2 Responses to IBRG Archive at the WCML. Out of Ireland. Six Irish Film Festivals 1988-93