Posted on August 17, 2018 by lipstick socialist 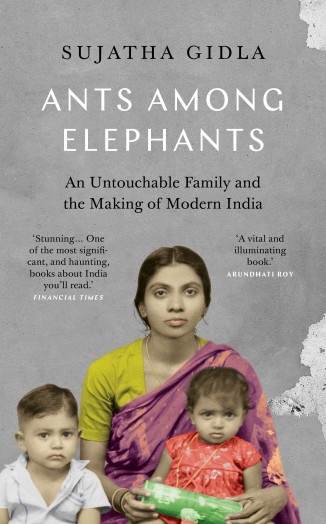 Sujatha Gidla’s new book is not about the modern India of bollywood, nuclear weapons and a thriving economy. It is her family’s story set at the end of British colonial rule,  a family of “untouchables” – part of the caste system  which dictates  their  role in society and even where they live. The title of the book sums up the “untouchable” experience, being an ant among elephants, at the bottom of a system that is determined to squash you.

One in six people in India are born as “untouchable:  “whose special role – hereditary duty – is to labour in the fields of others or to do other work that Hindu society considers filthy, are not allowed to live in the village at all.”

It was when Sujatha left India to study in America that she decided to talk to her family about her background. Her uncle K. G. Satyamurthy, known as SM, was a founder in the early 1970s of a Maoist guerrilla group, which the Indian government designated as the biggest threat to national security.  His sister and Sujatha’s mother, Manjula –  who against all odds  becomes a teacher-  is the  heroine of the book.

Ants Among Elephants is  both her family’s  story and that of the independence movement in India. Sujatha’s account of discovering her family’s history is a fascinating as the story itself. It is based on taped interview with her mother and uncle and their contemporaries over fifteen years. She also visited the places where her family had lived, to remote villages where she came across people who were happy to share their memories and backed up the stories that her mother and uncle  had told her.

The story begins in the 1800s in Khamman district where her grandparents were part of a nomadic clan. They were not Hindus,  but had their own tribal goddesses living a remote forest based existence. But when the British cleared the forest for teak plantations their family was forced out, took up farming and lived alone near a lake. They were also now designated as despised outcasts and  “untouchables”. But it is a familiar story in India where to this day  tribal people are often driven off their land and forced to become  landless labourers.

Ants Among Elephants  is a story of how people, however poor and marginalised,  can and do fight back.  The book takes the reader through a complex history of mass and individual opposition to poverty and injustice. It is an era in which  politics are writ large,  one that  delivered independence to India but one that sold short the untouchable community.

Satyam became an important member of the Communist Party, sacrificing everything, including  a normal life and his family, to take up the struggle for justice for the poor. He carried on this political work to the end of his life when he could hardly walk and his supporters had to carry him on their backs through the jungle.

Manjula’s story is the most poignant. Her struggle for an education and a decent job is heartbreaking.  But her own philosophy kept her going. “Owing to the twin influences of Christianity and Communism, Manjula believed that the task of removing all the immorality, injustice and corruption from the nation rested upon the shoulders of people in positions of responsibility, however slight, and that everyone must do his or her part.”

At the age of fourteen Sujatha followed  her family’s politics and   joined the Radical Students Union, the student wing of the People’s War Group. And when she took part in a strike at college she was arrested – the only girl. “The police made it impossible for our families to find us by continually moving us from one precinct to another. We were deprived of food and water and sanitary facilities for long periods and tortured.”

She now lives in the USA and is the first Indian woman to work as a conductor on the New York subway. “When I left and made friends in a new country, only then did the things that happened to my family, the things  we had done, became stories. Stories worth telling, stories worth writing down.”

Ants Among Elephants is not just a story worth writing down, it is an important part of Indian history and one that hopefully will inspire other people to follow in the footsteps of Manjula, Satyam and Sujatha.

I am an activist and writer. My interests include women, class, culture and history. From an Irish in Britain background I am a republican and socialist. All my life I have been involved in community and trade union politics and I believe it is only through grass roots politics that we will get a better society. This is reflected in my writing, in my book Northern ReSisters Conversations with Radical Women and my involvement in the Mary Quaile Club. .If you want to contact me please use my gmail which is lipsticksocialist636
View all posts by lipstick socialist →
This entry was posted in biography, book review, Communism, education, feminism, human rights, political women, Uncategorized, women, working class history, young people and tagged "untouchables", India, K. G. Satyamurthy, Sujatha Gidla. Bookmark the permalink.