My review of “Guilty Until Proven Innocent” by Jon Robins 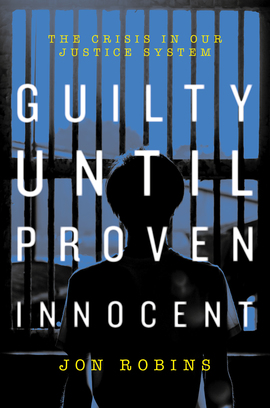 In the introduction to this critical and crucial analysis of the criminal justice (or rather injustice) system Michael Mansfield QC (who represented people in  many of the cases mentioned)  reminds  the reader that after the 1980s landmark miscarriage of justice cases such as the Birmingham Six, which revealed gross non-disclosure by the judiciary,  safeguards were brought in which were supposed to stop a repeat of these cases. But this book shows that the system is now in crisis and that  little has changed since the bad old days of the 1980s.

In chapter after chapter Robins reveals how the system is in a state of permanent decline and the effect that this has had on people caught up in it. The budget for the Ministry of Justice has been cut by 40% since 2010,  affecting  every part of the system from prisons to legal aid.  The Criminal Cases Review Commission,  a state-funded miscarriage of justice watchdog, which was set up in response to the Birmingham Six case, is now so underfunded and overwhelmed with cases that it is dysfunctional.

The Birmingham Six, and many not so well known other Irish cases, were lucky in that national campaigns were set up and run by grassroots Irish community groups, such as  the Irish in Britain Representation Group of which I was a member.

IBRG also vociferously campaigned against The Prevention of Terrorism (Temporary)   Act which was rushed through Parliament in 1974 after the Birmingham pub bombings. This draconian legislation allowed the police to carry out raids throughout the Irish community. One of the few people who was brave enough at this time  to help those detained was Sister Sarah Clarke who later wrote in her biography;

People picked up under the PTA had no rights whatever in those early days. They disappeared. Eventually we found out they could be held for seven days. Police denied they were holding people. Detainees were questioned at all hours, day and night, and solicitors were not allowed in….Young children were questioned about their fathers’ and mothers’ habits and friends, and they were bribed with sweets.   (No Faith in the System; A Search for Justice.)

In the 1980s a campaign was set up to publicise what was going on,  to provide support for people detained and to campaign against this act. The PTA Research and Welfare Organisation acted as soon as an Irish person was arrested and ensured that they got legal advice – and a campaign if needed. These cases fitted into a “political category” which raised their profile, particularly in the years 1981-1998.

The publicity gained by campaigns such as the Birmingham Six  led to other Irish prisoners in non-political cases contacting us. In the IBRG archive at the WCML the files are bulging with cases including the correspondence from  Michael O’Brien of the Cardiff Newsagent Three.

IBRG also brought up the issue of Irish deaths in police custody. At one of our Coventry meetings the sons of Leo O’Brien spoke about their father who had been arrested by the police as “drunk” but in fact  had suffered a blot clot and  was left in a police cell without medical care. He later died . His family  asked for support for a leaflet and for  help with their campaign.

Non-Irish people would contact us and there is a letter from Sue Caddick, sister of Eddie Gilfoyle, who was wrongly convicted of the murder of his wife. She asked for their leaflets to be circulated around the Irish networks and for publicity for meetings.

But, as Robins shows,  most people who are arrested and  convicted but are innocent are not so lucky. They are dependent upon themselves, a family member or friend to support them, a lawyer who is prepared to work pro bono, or a group such as the Miscarriages of Justice Organisation, set up by Paddy Hill, one of the Birmingham Six,  in 1991.

In 2018 the political settlement in the North of Ireland has emptied British prison of Irish political prisoners. A few years ago I spoke at a meeting in Oldham to a Muslim audience about how the Irish community defended themselves against legislation such as the PTA. The Muslim community has now taken over the mantle of the Irish as the latest “suspect community” and it seems highly likely that  similar miscarriage of justice cases may emerge.

Today miscarriages of justice are also more complex, including historical sexual abuse, “joint enterprise” convictions:  cases that do not fit easily into a category.

In conclusion Robins believes that we all have a stake in ensuring that the justice system works. “The increasing focus on convicting the guilty instead of protecting the innocent means that we may soon all have cause to fear the dawn raid.”

For a political history of the Irish in Manchester read “The Wearing of the Green” by Michael Herbert. Buy it here

I am an activist and writer. My interests include women, class, culture and history. From an Irish in Britain background I am a republican and socialist. All my life I have been involved in community and trade union politics and I believe it is only through grass roots politics that we will get a better society. This is reflected in my writing, in my book Northern ReSisters Conversations with Radical Women and my involvement in the Mary Quaile Club. I am a member of the Manchester and Salford National Union of Journalists.If you want to contact me please use my gmail which is lipsticksocialist636
View all posts by lipstick socialist →
This entry was posted in book review, human rights, Ireland, Irish second generation, labour history, Manchester, North of Ireland, political women, Uncategorized, women, working class history, young people and tagged Birmingham Six, Cardiff Newsagent Three, Irish in Britain Representation Group, PTA Research and Welfare Organisation, Sister Sarah Clarke. Bookmark the permalink.