My review of “Poster Workshop 1968-1971” by Sam Lord with Peter Dukes, Jo Robinson and Sarah Wilson. 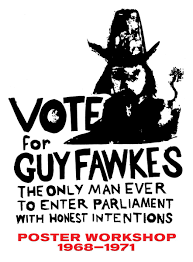 It is the May elections this week and the title of this book will resonate with many people: they are that disillusioned with the political process and politicians.  But this book is not about politicians; it is about how people at a grassroots level, 50 years ago, really did believe that they could change society and not just here but over the water in the North of Ireland,  in South Africa and in  Vietnam.

This book tells the story of the Poster Workshop in London and how they  used the new technology of screen printing, which allowed people to produce cheap and accessible posters  to convey important messages for all kinds of political movements.

The Poster Workshop was part of a bigger worldwide  movement which began in France in May/June 1968 when students alongside workers went on strike,  challenging the right wing government and demanding seismic change in society. It was a movement that spread across the world, offering hope for people at a grassroots level to turn society upside down and make it a fairer and more just place to live.

It was not just about challenging the system –  but combined with the new hippy counterculture – threw it back on individuals and groups to produce an alternative lifestyle, one that was based on a do it yourself politics,  reflected in actions which ranged from squatting to the occupation of factories. And Poster Workshop responded to  this; “ working without bosses, and with an open-door policy, they invited people to come in and print their own posters.”

It is hard to imagine in these days of Facebook and Twitter the difficulty in the 1960s for groups to get their message out and respond quickly  to events. The Poster Workshop and other “peoples printshops” were crucial in passing on skills to activists to make their own pamphlets, leaflets and newsletters – and,  most importantly,  having “peoples printshops” to print them cheaply. But it was part of a vibrant political culture; “These groups didn’t just find new forms to raise political issues, but also took their performances to “the people” on protests and pickets, in tenants and community halls and squats.”

The story of how the Poster Workshop started up is fascinating. Radicalised by the Vietnam War,  art school graduate Sam Lord built a screen printing table in his kitchen and started producing political posters. A meeting with Jean Loup, a French Tunisian, who had been active in the Atelier Populair – a student-occupied print workshop in Paris which produced posters to promote the revolutionary activities in 1968 – led to the creation of the Poster Workshop.

The Poster Workshop was a mixture of art graduate and activists,  and it inspired other people, including a Cockney pensioner called Scriv, to design, print and maintain the workshop.

They didn’t just  travel  around the country and beyond to pass on their skills to other groups,  but went over to the North of Ireland where an often forgotten struggle of the 1960s was being played out.  The Poster Workshop were invited  by  People’s Democracy: a political organisation that campaigned for civil rights for the Catholic minority (at that time most of whom  could not vote in elections) and a united socialist republic.

Art school graduate Sarah Wilson  went to Belfast and  showed people how to make the posters. “In a small community centre a board was put up inviting people to write down ideas for slogans. They were checked every day, and the best selected for new posters.”  When the locals could take on the work themselves Sarah then moved onto Derry to start another workshop.

Not surprising to those of us involved in Irish politics, it was only in Belfast that people who fly posted were arrested by the British Army, and one  was sent to prison for three months. In Britain fly posting was seen as a minor offence,  usually resulting in a fine,  but it reflected how much more serious were the politics going on in North of Ireland.

Leafing through this book it tells us so much visually about the politics of the era. The posters are beautiful, anarchic and direct. They shout out against unfairness, injustice and discrimination,  but they also encourage and inspire in a way that art work today does not. Maybe because they were part of a grassroots movement that belonged,  not just to the poster makers, but to the society at that time.

Unfortunately, at the moment, there is lots of nostalgia around about past events and sadly, many of them such as Grunwicks and the Miners Strike, where we lost. And although today, through social media,  we can communicate fast and direct,  the technology is not communal, it is not about sharing a creative process,  and very often does not empower people.

The power of the story of the Poster Workshop and all the groups and individuals involved screams out; yes we can do it, we can change society and we will do it together.

“In our youth we danced for liberty and personal freedom, not the liberty to exploit and oppress, but to turn our dreams of equality into reality. Let’s continue dancing!”

I am an activist and writer. My interests include women, class, culture and history. From an Irish in Britain background I am a republican and socialist. All my life I have been involved in community and trade union politics and I believe it is only through grass roots politics that we will get a better society. This is reflected in my writing, in my book Northern ReSisters Conversations with Radical Women and my involvement in the Mary Quaile Club. .If you want to contact me please use my gmail which is lipsticksocialist636
View all posts by lipstick socialist →
This entry was posted in anti-cuts, book review, Catholicism, Communism, drama, education, feminism, human rights, Ireland, labour history, North of Ireland, political women, Socialism, Socialist Feminism, trade unions, Uncategorized, women, working class history, young people and tagged Atelier Populair, Belfast, Bernadette Devlin, Derry, People's Democracy, Poster Workshop 1968-1971. Bookmark the permalink.

3 Responses to My review of “Poster Workshop 1968-1971” by Sam Lord with Peter Dukes, Jo Robinson and Sarah Wilson.