My review of Women Who Blow on Knots by Ece Temelkuran

Posted on September 20, 2017 by lipstick socialist 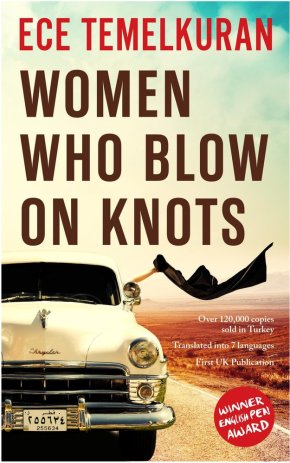 Ece Temelkuran is a Turkish journalist and writer. Her books and writings have taken up issues at the heart of the state of Turkey,  exposing human rights abuses against Kurdish people, the Armenian dispute and, closer to home, the Gezi uprising in 2013.  The atmosphere in Turkey is now toxic for journalists like Ece and, after being fired from her job in 2012,  she moved to Tunisia to write this novel; Women who Blow on Knots.

I have to say I do prefer the  title used in other countries; “What good is a revolution if I cannot dance to it,” referencing anarchist and writer Emma Goldman who believed in the absolute importance of the individual whilst promoting collectivity in action.

This novel starts out as a road trip,  but it’s no Thelma and Louise. Three young women set out on a journey with the mysterious Madam Lilla across Tunisia to the Lebanon against the backdrop of the Arab Spring. One of them is a Turkish journalist who is wary of returning home,  fearful of the mass arrests going on and that she will be picked up. The other women are Amira, a Tunisian woman,  and Maryam from Egypt.

Through their stories we learn more about the lives of women in these countries, the impact of the Arab Spring,  and the continuing debate about what kind of future can exist in the region.

Layering their discussions are many references to Arabic music, history, and religion,  but central to it is the story of the women. “We were three women fated to take refuge in a story, looking out for each other as we moved forwards, three women soon to become four.”

Unlike many western novels this is a highly literate and intellectual story,  laced with the myth of Dido and numerous references to Arabic culture and religion. It is totally understandable that it has sold over 120,000 copies in Turkey. It speaks to those women and addresses not just the politics going on,  but bigger themes about the links between women, about sisterhood and the complex and difficult lives that many women in the region face.

It is also a funny book,  picking up on the way that women rib each other and puncture  selfishness and pomposity. For me, as a western woman,  it gives me an insight into the lives of women in countries as diverse as Tunisia and Egypt. It gets beyond the usual stereotypes of women in these countries and challenges western views of their lives and hopes for the future.

I am an activist and writer. My interests include women, class, culture and history. From an Irish in Britain background I am a republican and socialist. All my life I have been involved in community and trade union politics and I believe it is only through grass roots politics that we will get a better society. This is reflected in my writing, in my book Northern ReSisters Conversations with Radical Women and my involvement in the Mary Quaile Club. .If you want to contact me please use my gmail which is lipsticksocialist636
View all posts by lipstick socialist →
This entry was posted in book review, Communism, feminism, human rights, Middle East, novels, political women, Socialism, Socialist Feminism, Uncategorized, women and tagged Ece Temelkuran, Turkey. Bookmark the permalink.