The chains of history connecting 1910 to 2016 : from Mary MacArthur and Mary Quaile to the Durham Teaching Assistants.

Posted on November 17, 2016 by lipstick socialist

Last week,  when  speaking at a West Midlands Unison meeting for women about the life of Mary Quaile,  I was vividly reminded  of the power of women and the power of women in trade unions.  While the problems women face (at this meeting sexual harassment at work was on the agenda,  not surprising given the environment of cuts)  might have changed,  the basic need for women to get together to discuss the particular issues that affect them,  and construct strategies to change them,  has not gone away. Nowadays trade unions are barely  recognisable from the days of Mary Quaile and Mary Macarthur,  but the issues that drove these women – recruiting women into trade unions, achieving  equality at work including equal pay for equal work –  have not gone away.

Mary Quaile was a grassroots person, even though she attained a place on the General Council of the TUC and later on in life became a Justice of the Peace. During her fifty years of activity she never strayed from her belief that trade unions were the answer to changing working class peoples lives and creating a fairer, democratic society but one with women at the centre.

In the West Midlands area one of the most significant strike actions by women was in 1910, when  the Cradley Heath chainmakers – all women – took strike action,  and won. They were some of the poorest of workers; they did not have a vote, were illiterate, worked a 54-hour week and had to take their children to work with them. Their story is told in the brilliant book Breaking their Chains; Mary Macarthur and the Chainmakers’ Strike of 1910, written by Tony Barnsley. 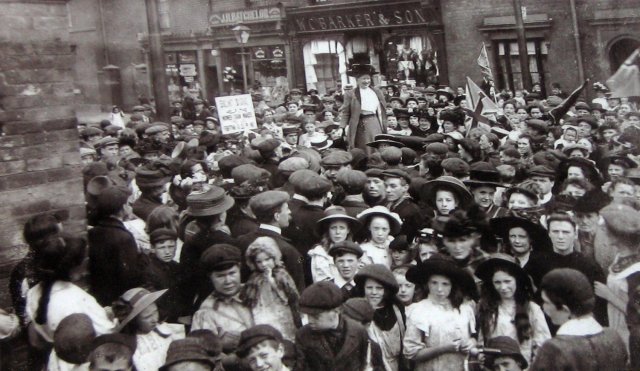 The leader of the strike was the charismatic Mary Macarthur (1880-1921), a woman who should be much better known. Mary was the founder of the National Federation of Women Workers, and , like Mary Quaile, she was an activist who was out on the picket line in the early mornings, rallied workers at meetings in the evenings, edited a paper which she also went out and sold,  and  was always happy to lead her women workers in mass demonstrations. Mary was media savvy, she recognised the importance of getting the chainmakers into the new Pathe news at the burgeoning cinemas which led to 10 million  people finding out about the chainmakers dispute,  and no doubt influencing the victory.

The chainmakers strike was in 1910,  but my research from the minutes of the Manchester and Salford Womens Trades Union Council  shows that as early as November 1903 the women in Cradley Heath contacted the MSWTUC and asked  whether one of the organising secretaries,  Eva Gore Booth,   could come down to help organise the women. Eva went down twice,  and on 1st March 1903  the MSWTUC minutes reported that Eva had held a meeting, and that 200 new members joined.

The two Marys had much in common. They were both anti-war and  both believed that internationalism was the answer to the onslaught of capitalism. But once the First World War had broken out,  both women worked to ensure that the increase of women workers going into industry, due to men being enlisted, would not be exploited.  Once again both women went out organising women into trade unions and, most importantly,  called for “equal pay for equal work.” Employers were quite happy to get women to take on men’s job but at  lower  wages. Throughout the war both women fought for equal pay for women and, by the end of the war,  women’s wages had increased by 50%.

Writing about the importance of trade unionism in  1908 Mary Macarthur said; “It entails loyalty, self-sacrifice and self-control: that it stands for the greatest good for the greatest number, and the interests of the individual must always be subservient to the common interests.” Both Marys gave their lives to improving the lives of women and building a trade movement that included women. Sadly few of Mary Quaile’s speeches were recorded but in her obituary in the Manchester Guardian it said; “Her determination to get trade unionism for women accepted was often met with jeers, boos, rotten apples and threats of violence. She spoke at hundreds of factory gate meetings in both the East End of London and Manchester; she never betrayed any sign of fear when faced with hostility.”

In 2016 we have seen the rise of modern Marys from the hotel workers in London to the Durham and Derby Teaching Assistants and the Kinsley Cleaners. For them the need for a trade union has not gone away, and they are following in the footsteps of their sisters; Mary Quaile and Mary Macarthur.

Lisa Turnbull,  one of the Durham T.A.s says,  “Looking back at strong women like Mary Quaile makes you realise that as a woman you can take the lead and fight for what’s right and fair. ..no one else is going to do it for you”.

Meet and listen to Lisa at the Mary Quaile Club Grunwick Strike   event on 3rd  December, 1pm,  at the WCML in Salford see

Watch Lisa and her comrades here

Read about the Kinsley Cleaners here You can donate by making a cheque out to Wakefield Unison and sending it to 18 Gills Yard, Wakefield WF1 3BZ.

You can buy “Breaking their Chains; Mary Macarthur and the Chainmakers’ Strike of 1910” by Tony Barnsley here

I am an activist and writer. My interests include women, class, culture and history. From an Irish in Britain background I am a republican and socialist. All my life I have been involved in community and trade union politics and I believe it is only through grass roots politics that we will get a better society. This is reflected in my writing, in my book Northern ReSisters Conversations with Radical Women and my involvement in the Mary Quaile Club. .If you want to contact me please use my gmail which is lipsticksocialist636
View all posts by lipstick socialist →
This entry was posted in anti-cuts, book review, education, feminism, human rights, labour history, political women, Salford, Socialism, Socialist Feminism, trade unions, Uncategorized, women, working class history, young people and tagged Durham Teaching Assistants, Mary Macarthur, National Federation of Women, unison. Bookmark the permalink.

2 Responses to The chains of history connecting 1910 to 2016 : from Mary MacArthur and Mary Quaile to the Durham Teaching Assistants.