Posted on October 13, 2016 by lipstick socialist 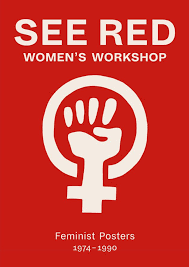 Activists today could learn a lot from the history of the See Red  Women’s Workshop. In this new book  which documents the life of the collective 1974-90, they provide some important lessons for all of us in how you get beyond the usual left/middleclass way of politics, and reach out to the average person, in this case women, to help them to acquire skills, work together in a non-hierarchical way, and produce some of the best political art of the last 40 years.

Their influence has been incredible. If you worked in the youth service in the 70s/80s you may well have seen their posters in youth centres or schools. If you were involved in a women’s group or went to a women’s conference again you would be aware of their artwork on the walls or being sold in stalls at the back of the hall. And it was a time when we had radical bookshops, such as  Manchester’s  Grassroots Bookshop, where you could buy See Red’s iconic  posters and calendars.

In 2016 sexism and negative views of women have not gone away. Today it exists in a different form with  social media and all the nastiness that can be transmitted  through Twitter, Facebook etc.  See Red was born in a time of great political activity which was grassroots and radical. In 1974 an advert was placed in a Women’s Liberation Movement  publication inviting women in the visual arts to a meeting to set up a group which would  discuss and challenge the sexist images of women in advertising and the media. Out of this arose the See Red Women’s Workshop.

In the 70s there was plenty of political activity going on,  but it was dominated by men. As the book observes,  “The left wing at that time, both the radical and the mainstream branches, didn’t take the Women’s Liberation Movement seriously nor recognise it would become a major part of people’s struggles across the world.” But society was changing as women-only conscious raising groups met nationally and locally   – and from  them grew innumerable  campaigns which addressed the inequality and oppression of women. Out of this dynamic environment See Red started to produce posters.

See Red was not just producing political art,  but were doing so in a collective way, from the initial idea of the poster to its completed design. This was challenging in itself,  and broke with traditional ideas of the cult of the artist and the pretensions around creativity and individuality. They say,  ”We wanted to challenge this way of working, and we decided from the beginning to work as a collective-to work in non-patriarchal structure, with no hierarchy and all decisions taken as a group.”

By 1976 they were producing posters and calendars,  and importantly keeping them cheap so that all women could afford them. Their posters were printed by silk screen methods which enabled them to set up almost anywhere – from women’s centres to playgrounds – producing art that spoke to women and their concerns in their environment. Through the vast network of conferences and events going on they were able to sell hundreds of posters, raising money which went back into the workshop.

See Red was funded by the women  doing part-time jobs and working for the collective on two and half days per week. Later on they got funding from the Greater London Council and began  to produce work for organisations. Over the years 30-40 women joined the workshop.  Grant funding meant they could bring more women into the printing via links  with local schools and a formal apprenticeship training scheme in 1980.    And  as they comment, “Sharing our skills, especially with women who ordinarily would not have the opportunity to learn about design and printing, was always important.”

The history of the See Red Women’s Collective is very much intertwined with the history of the women’s movement and the left in the UK. Over the years the grassroots campaigning philosophy of the women’s movement changed.  as did the style of their work leading to the demise of See Red in 1990. Feminism in the C21st is dominated by ideas of individualism and rising upwards in the system,  rather than collectivism and campaigning against a very unfair and cruel society,  particularly to women.

Looking through the posters they seem just as relevant today; promoting powerful images of women, calling for protest and opposition to inequality and injustice.  But they were also attractive posters, that yes you wanted to put up on your wall to promote the message, but you also loved the artwork. This is a brilliant book, one that I hope  will inspire people,  both  women and men,  to believe that we can make a difference –  but only through a more collective viewpoint about politics and  creating a better world. Buy it here

I am an activist and writer. My interests include women, class, culture and history. From an Irish in Britain background I am a republican and socialist. All my life I have been involved in community and trade union politics and I believe it is only through grass roots politics that we will get a better society. This is reflected in my writing, in my book Northern ReSisters Conversations with Radical Women and my involvement in the Mary Quaile Club. .If you want to contact me please use my gmail which is lipsticksocialist636
View all posts by lipstick socialist →
This entry was posted in anti-cuts, book review, education, feminism, human rights, labour history, political women, Socialist Feminism, trade unions, Uncategorized, women, working class history, young people and tagged Grassroots Bookshop, See Red. Bookmark the permalink.