Fiery Women: my review of The Red Virgin and the Vision of Utopia by Mary M Talbot and Bryan Talbot and Petroleuse by Steph Pike

Posted on June 9, 2016 by lipstick socialist

In 2016 we need our heroes and in these new  books there is much to remind us that another, fairer world is possible.  Mary M. and Brian Talbot’s graphic novel, The Red Virgin and the Vision of Utopia,  is about Louise Michel, a political  activist and writer in the politics of France in the 1870s, while  Steph Pike’s new collection of poetry, is called Petroleuse , the name  given to women revolutionaries by the reactionary French forces which destroyed the Commune and killed thousands of people.

Louise Michel was a great believer in creating utopia on earth; an ideal that motivated her lifelong struggle to turn society upside down and creater a just society. In this graphic novel her story is told through the arrival of socialist feminist Charlotte Perkins Gilman to Paris  as they are burying Louise. Both women were interested in the idea of utopias, which was a popular theme among socialists at that time.

Louise Michel is a fascinating if forgotten historical figure. She was an anarchist and feminist who lived her politics; as happy to take up a gun as to form a women’s cooperative.  In March 1871 the people of Paris set up their own workers’  government; the Commune. Louise saw this as the key opportunity to create an utopia: to abolish private property, to give rights to women and children and to create a new kind of  society. But it only lasted 10 weeks. Then  the French army bombarded the city, killing thousands of people, and retook Paris.

Louise was arrested and deported to New Caledonia.  Even there she took up the cause of the indigenous people, learnt their language, and wrote about their lives. This summed up Louise’s life: she always took the side of the oppressed which meant that even after being allowed back to France in 1880 she continued her political activities,  spending many years in prison.

I am not a great fan of the  graphic novel format,  but Louise’s  dramatic life entirely suits it. And the extensive list of sources and notes gives people like me,  who always want to know more, the opportunity to follow up the novel.

Steph Pike is a poet and feminist socialist who lives in the north west. Active in the Peoples Assembly   in Petroleuse, her new collection,  she firmly stamps her politics on her poetry. The front cover sums up a lot of the poetry; a picture of Steph dominates, scary and red.

We hear her rage in her poetry: at the commodification of womens bodies in We Will not be Deodorised, the business take over of Mardi Gras, sexual abuse and the murder of women in real life cases in Amstetten. I can hear her in shouting in Kettled, EDL and Welfare to Workfare.

I love her Suffragette City, retelling how suffragettes smashed pictures in Manchester Art Gallery as part of their campaign for the vote. She links them up to modern day activists, Pussy Riot, reminding them that they are not alone. Away from the anger are some sweet poems dedicated to Manchester: Dusk in St. Anne’s Square and Piccadilly Gardens.

Steph says about her poetry; It is a call to action to question and change the world we live in. It is a call to take to the streets to fight for what we believe in. Unlike the 1870s we are living in times where people do not talk about the future and have little hope that life can get better. We need to be reminded that we can make a difference, that we can follow in the footsteps of women such as Louise Michel, and that poets like Steph Pike can inspire us to get active.

And watch 80s band Au Pairs and their savage indictment of British human rights abuses in Ireland in 1981 …..Armagh 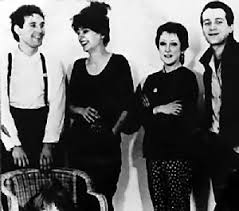 I am an activist and writer. My interests include women, class, culture and history. From an Irish in Britain background I am a republican and socialist. All my life I have been involved in community and trade union politics and I believe it is only through grass roots politics that we will get a better society. This is reflected in my writing, in my book Northern ReSisters Conversations with Radical Women and my involvement in the Mary Quaile Club. .If you want to contact me please use my gmail which is lipsticksocialist636
View all posts by lipstick socialist →
This entry was posted in anti-cuts, book review, education, feminism, human rights, Ireland, labour history, Manchester, music, North of Ireland, novels, poetry, political women, Uncategorized, women, working class history and tagged Au Pairs, Charlotte Perkins Gilman, Louise Michel, Paris Commune 1871, Petoleuse, Steph Pilke. Bookmark the permalink.

2 Responses to Fiery Women: my review of The Red Virgin and the Vision of Utopia by Mary M Talbot and Bryan Talbot and Petroleuse by Steph Pike