Dheepan (Home)…how much do we really know about the refugees who escape war in their country and arrive in the west? Few people know about the war in Sri Lanka and the role of militants, the Tamil Tigers, who fought a civil war lasting from 1983-2009 in order to create an independent Tamil state. In this brilliant new film Dheepan, a Tamil paramilitary, finds refuge in Paris, bringing with him a “wife” and “child” in order to ensure his escape. But in his job as a caretaker he finds himself part of a new war; a drugs war that dominates the banlieu that he lives and works on. And the war zone that he escaped, in which his real wife and children were murdered by government forces, comes back to haunt him. It is another great French film that gives an insight into the lives of refugees, of little known wars that our country has probably interfered in, and the cost to refugees of trying to find peace and security in the West. Watch the trailer here 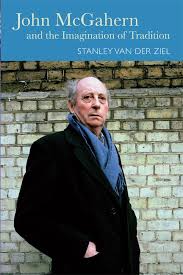 John McGahern and the Imagination of Tradition by Stanley Van Der Ziel. McGahern is one of my favourite authors. This is not a biography, which is what I expected, but an analysis of the way in which his fiction was shaped by other literary traditions including writers as varied as Yeats, Jane Austen and  Primo Levi . If that is all a bit academic, there are little nuggets about McGahern that are spread throughout the book which give an interesting insight to the man. I have always believed that he was a shy and self-effacing character  and that was confirmed when I found out, from this book, that when he worked as a lecturer in many universities across the world, he never put his own books on the curriculum. An act that nowadays you cannot imagine given the celebrity nature of most authors.   McGahern’s novels became very popular in Britain during the 80s with a new audience including second generation Irish such as myself. They spoke to another view of Ireland; from a writer whose family had been involved in the creation of the new Irish Republic and was not shy of referencing  IRA activists such as Ernie O’Malley, a soldier and and writer.  Reading this book  I have found out much more about  McGahern although I am not sure if it really adds much to his work and whether the term “too much introspection” is  the phrase that springs to mind. It has certainly encouraged me to return to some of his earlier novels and to read authors such as Primo Levi. Best to try and get it through your library, because, as expected,  it is a costly academic book.

To some, free classical music, by some of the best performers in Manchester. On 29 April at the RNCM at 1.15pm listen to pianist,  Graham Scott. Get there early as it is really popular! Further details see

To the Manchester May Day Festival on Saturday 30 April. It starts with a traditional march and speeches followed by lots of things to see, buy and watch for free.  Take part in some of the discussions around the campaigns against the privatisation of the NHS, find out about the relevance of the Easter Rising to trade unions today and watch a brilliant play about Manchester Irish trade unionist Mary Quaile and the relevance of her life to fast food workers today. Further details see

I am an activist and writer. My interests include women, class, culture and history. From an Irish in Britain background I am a republican and socialist. All my life I have been involved in community and trade union politics and I believe it is only through grass roots politics that we will get a better society. This is reflected in my writing, in my book Northern ReSisters Conversations with Radical Women and my involvement in the Mary Quaile Club. I am a member of the Manchester and Salford National Union of Journalists.If you want to contact me please use my gmail which is lipsticksocialist636
View all posts by lipstick socialist →
This entry was posted in anti-cuts, book review, drama, feminism, films, human rights, Ireland, Irish second generation, labour history, Manchester, music, novels, political women, trade unions, Uncategorized and tagged Deephan, John McGahern, mary quaile, RNCM, Tamil Tigers. Bookmark the permalink.