Why we need to reclaim International Women’s Day from the middle class feminists!

Posted on March 8, 2016 by lipstick socialist

I have grown to hate International Women’s Day. As the lives of women (and the partners we live with) deteriorate under the Tory government with the collaboration of Labour councils, the meaning  of the annual Day, started by Socialist women in 1911, is drowned under   a hail of “let’s celebrate women”. Celebrate what?? IWD, apart from a few events run by trade unions or women’s groups at the margins of society, is now an event that gets crazier every year. The latest being the whole bonkers  idea of  statues. Manchester Council plans to put up a statue of  Emmeline Pankurst, which given the fact  she abandoned her Socialist beliefs and had joined the Tory party at the end of her life , would suit her well.

But it has reached rock bottom when a weird combination of the Corporation of London and the TUC want to erect a statue of Sylvia Pankurst. Obviously it has nothing to do with her Communist politics, her anti-fascism, nor her lifelong committment to poor women and men.  It does reflects an ever growing divide in society when IWD  has become an event for middle class, privileged women who have annexed  a Socialist event as an opportunity for them to take centre stage, whilst ignoring their poorer sisters.

For me feminism is about changing society from the bottom up and in this new book Headscarves and Hymens; Why the Middle East Needs a Sexual Revolutionthe author Mona Eltahawy sums up the revolutionary nature of feminism. Mona is a writer from Egypt and is an activist who took part in the revolution there in 2011 and was beaten up and sexually assaulted by the police.

In this book she makes the case for a sexual revolution in the Middle East. She believes that revolution is the chance; “to dismantle an entire political and economic system that treats half of humanity like children at best.” I found this a difficult book to read because of the graphic descriptions of the abuses that Arab women face. From the daily sexual harassment of women who are dressed in traditional burkas to women having their genitals cut, to women activists who are subjected to “virginity tests” as a punishment for speaking out, the acceptance of child marriage and of men beating their wives and so it goes on.

Mona’s own experiences, even as a child of professional parents, underlines the reality that  women across the Middle East cannot escape the systematic second class citizenship of women. Her parents moved to Saudi Arabia when she was 15 years. Her mother, a lecturer, was forced to work on a female-only campus and  was not allowed to drive. When they couldn’t get driven by her father or a taxi, she and her mother  got the local bus where women are segregated into the back of the bus. As she says; “I lived in this surreal atmosphere for six years.”

For Mona this experience had a momentous affect; “I was traumatised into feminism-there’s no other way to describe it-because to be a female in Saudi Arabia is to be the walking embodiment of sin.” But even in ultra-conservative Jeddah she found feminist tracts in the university library. She discovered Huda Shaarawi, who in the 1920s launched the Egyptian women’s rights movement and, a familiar name to western feminists, Nawal El Saadawi another Egyptian activist, who has been imprisoned and received death threats for her politics. 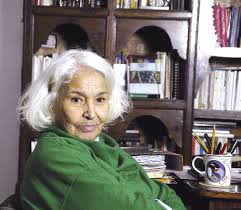 It was when Mona returned to Egypt in the 1980s and  became a freelance writer that she met up with people who had been fighting the Mubarak regime for years; opposing the systematic state brutality of people and the particular attacks on young people. Twenty three years later and the Egyptian revolution began. To Mona this was the beginning of  a movement  that would not just change society but “root out the systematic hatred of women that reduces us to little more than our headscarves and hymens.”

Central to the book is Mona’s own experiences and the way in which she deals with the particular pressures on young women; from the wearing of a hijab to the exploration of her sexuality. In the West we are used to frankness in all matters relating to sexuality, but it is a brave step for a woman from such a conservative society to do so publicly.

Terrible things are happening to women over there but Mona tells the stories of women across the region who refuse to be cowed and silenced; from  women speaking publicly in the Lebanon about being lesbian, bisexual and transgender to the campaign in Morocco to change the law which punishes people caught having sex outside marriage with imprisonment.

Headscarves and Hymens is not a depressing book although it is horrifying to read the violence meted out to women and children in a systematic way by governments in the Middle East. Mona moved back to Egypt in 2013 to continue her activist work. There is a growing feminist movement there inspired by longterm activists such as Nawal El Saadawi who is still out there passing on her experiences and supporting new women to get involved. And Mona is part of that thread of women whom she says; “We will have a reckoning with our culture and religion, with military rulers and Islamists-two sides of one coin. Such a reckoning is essentially a feminist one. And it is what will eventually free us.”
IWD was created by German socialist women to gain power and representation for women (alongside their men) and to me this book, this author and the feminist movements in the Middle East are the embodiment of what women should be doing in 2016. We should refuse to “celebrate” and instead get angry and refuse to accept the attacks on our lives, our partners and our society. Start by buying this book at

I am an activist and writer. My interests include women, class, culture and history. From an Irish in Britain background I am a republican and socialist. All my life I have been involved in community and trade union politics and I believe it is only through grass roots politics that we will get a better society. This is reflected in my writing, in my book Northern ReSisters Conversations with Radical Women and my involvement in the Mary Quaile Club. .If you want to contact me please use my gmail which is lipsticksocialist636
View all posts by lipstick socialist →
This entry was posted in anti-cuts, book review, Communism, education, feminism, human rights, International Women's Day, Palestine, political women, Socialist Feminism, trade unions, working class history and tagged Sylvia Pankhurst, Tameside against the Cuts. Bookmark the permalink.

3 Responses to Why we need to reclaim International Women’s Day from the middle class feminists!