Posted on March 6, 2016 by lipstick socialist 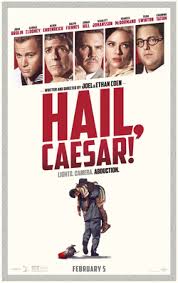 Hail Caesar(Home)…at last a funny film! Set in ‘50s Hollywood there are several plots going on but George Clooney as Baird Whitlock, the star of a Quo Vadis type movie, does steal the show at least for me. He plays a goofy and not very bright lead actor who is drugged and kidnapped by a mysterious group called The Future. They turn out to be Communists and convince Whitlock of their politics. At the same time Josh Brolin as Capitol’s Head Of Physical Production, Eddie Mannix, tries to placate everyone, from his studio boss to the gossip newspaper journalist sisters, both played by the excellent Tilda Swinton. Not all of it works, but it’s classic Coen Brothers with lots of nods and winks to Hollywood at its best and worst.
Find

Out what feminism looked like in 1971. Was everybody posher in those days?? A little gem of a film trying to grasp at what was dubbed “the second wave of feminism”. Love it because it shows what socialist feminism is really about; how socialist women took their ideology and made it real by supporting the Night Cleaners campaign. Wonderful footage of the Nightcleaners campaign leader, May Hobbs, (find out more about her here) and, in the background having her hair styled (!!) is Bernadette Devlin McAliskey. This is what socialist feminism meant in 1971. Watch it here.

The women at Yarls Wood Prison and their protest against immigration detention. If International Womens Day means anything at all, it is about supporting some of the most vulnerable women in society and that includes women held in detention for no other reason than they have escaped war, poverty and repression in their home countries. And, as the organisers Movement for Justice say; “The demonstrations and resistance inside Yarl’s Wood have been the most important fight in Britain for women’s rights and for immigrants rights, because they have been inspiring – because the people in this struggle are fighting to win the most basic of demands as human beings.” Join them on Saturday 12 March 130pm further details see

at The Rhubarb Triangle and Other Stories: Photographs by Martin Parr, Thursday 4 February – Sunday 12 June 2016 at the Hepworth Wakefield. I love Martin Parr’s photographs; they say so much about modern life and reflect his respect for the lives of working class people. His latest exhibition is about the rhubarb business in Wakefield, Yorkshire: a business that has been going on since the C19th and, looking at these photos, it hasn’t changed much. Martin’s photos show the backbreaking and dirty work that goes into producing rhubarb in the C21st. I don’t know how he managed to produce photos of rhubarb that are so vivid red. The photos of the workers are powerful and respectful of them and their trade. They are an important part of the community in the Wakefield area and this is reflected in the exhibition. Unfortunately you have to go to the Hepworth in Wakefield to see it. It must be one of the ugliest looking galleries in the country. And, like the Whitworth Art Gallery in Manchester, the Hepworth was given loads of money to set up on the dubious premise that it would regenerate Wakefield. Well, it didn’t work; have a walk around Wakefield centre. But the exhibition is definitely worth seeing.

I am an activist and writer. My interests include women, class, culture and history. From an Irish in Britain background I am a republican and socialist. All my life I have been involved in community and trade union politics and I believe it is only through grass roots politics that we will get a better society. This is reflected in my writing, in my book Northern ReSisters Conversations with Radical Women and my involvement in the Mary Quaile Club. .If you want to contact me please use my gmail which is lipsticksocialist636
View all posts by lipstick socialist →
This entry was posted in Bernadette McAliskey, Communism, drama, feminism, films, human rights, labour history, political women, Socialist Feminism, Uncategorized, women, working class history and tagged Hail Caesar, Martin Parr, May Hobbs, Rhubarb Triangle, Yarls Wood Prison. Bookmark the permalink.