Posted on November 29, 2015 by lipstick socialist

and support Moston Miners as they put on a Laurel and Hardy Alldayer, Saturday 12th December 2015, 10am – 8pm, only £2.00! Back to back films from the Kings of Comedy live on the Big Screen. Watch this wonderful clip see  A great tonic for living in Austeria!
Remember

The Manchester Martyrs – three men who were wrongly tried and executed for a crime they did not commit. In 1867, during one of the most turbulent periods of history in Manchester, with the Irish community at the heart of it, two Fenian prisoners were freed from a police van on Hyde Road in Manchester. During the raid a policeman, Sergeant Charles Brett, was accidentally shot dead. Three Irishmen, William Allen, Michael Larkin and Michael O’Brien, were convicted for the shooting and hanged in public outside the New Bailey prison, Salford on 23 November 1867. The Manchester Martyrs were remembered each year by a Catholic mass and procession to the monument in Moston Cemetery with many people, including my father taking part. After the Birmingham Pub bombings in 1974 it was cancelled. In the 80s a more political and controversial march was started by largely left, not Irish, groups. Today the commemoration has reverted back to a religious ceremony followed by a procession to the monument.
To mark the centenary of the execution of the men in 1967 Liverpool sculptor Arthur Dooley made a model for a permanent monument to the three men which was never commissioned. It is now being exhibited at the WCML see
Further info see 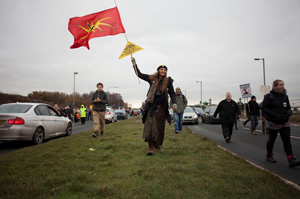 The Battle of Barton Moss; an exhibition by local photographer Steve Speed about one of the most important anti-fracking protests in the north west. It started in November 2013 when IGas wanted to start exploratory drilling at Barton Moss in Salford. Enviromentalist activists set up camp to stop them and the protest continued until April 2014 when IGas stopped drilling. Steve spent 3 to 4 days a week during the protest photographing everyone and every event. This is important history; it shows how a community can grow out of protests and most importantly how it can succeed. Please make a donation towards the cost of the exhibition see

Xmas and go to a free lunchtime concert at the Martin Harris Centre. Listen to Tim Langston (tenor), Jonathan Fisher (piano) as they perform a a programme of songs by Bridge, Britten, Beethoven, Strauss and Quilter on 3 December at 13.10. Further info see

I am an activist and writer. My interests include women, class, culture and history. From an Irish in Britain background I am a republican and socialist. All my life I have been involved in community and trade union politics and I believe it is only through grass roots politics that we will get a better society. This is reflected in my writing, in my book Northern ReSisters Conversations with Radical Women and my involvement in the Mary Quaile Club. .If you want to contact me please use my gmail which is lipsticksocialist636
View all posts by lipstick socialist →
This entry was posted in education, feminism, films, human rights, labour history, music, Salford, Uncategorized and tagged Barton Moss, Laurel and Hardy, Manchester Martyrs, Steve Speed. Bookmark the permalink.

1 Response to Stop,Look,Listen…my weekly selection of favourite films, books and events to get you out of the house