Dare to be Free ; the life of Irish Trade Unionist Mary Quaile

Posted on October 22, 2015 by lipstick socialist

The film Sufragette gives a very sanitised and selective view of the lives of working class women in this country. The main character, Maud, is a victim of her husband and her exploitative employer, and when she gets involved with the suffragette movement is then exiled from her community. Not true. The East End of London in the early part of the century was a hotbed of trade union militancy, women workers fighting for rights at work and the Fenians agitating for freedom for Ireland.

If we want true history socialists and trade unionists need to research and write their own history. That is why the Mary Quaile Club started up and why we are in the process of commissioning a play and a pamphlet about the life of an unjustly forgotten heroine of the trade union movement

Dare to be Free was the motto that trade unionist Mary Quaile wrote above her signature in an autograph book of famous trade union activists in 1924. The motto summed up her life. She dared to become a trade unionist and activist in Manchester in the early 20Cth and was a key figure in Manchester Trades Council, the TGWU and on the TUC General Council in the 1920s.

Today her life is an inspiration for low paid workers and trade unionists facing the onslaught of new Tory legislation that directly attacks the rights of workers to take strike action and legitimises the use of scabs to cover strikes. Quaile was also known for her support for marginalised groups including homeworkers as well as encouraging more women to join trade unions.

She was born in Dublin in 1886, one of nine children to James and Bridget Quaile. James Quaile was a prominent member of the Brick and Stonelayers Union in the city, but, like many Irish workers over the centuries, he moved to England for work.

Mary went to work at the age of 12 years as a domestic, a familiar path for Irish women to work in the houses of the upper classes of Manchester. By 1908 she was a cafe worker in one of the many establishments in the city of Manchester. Cafe work was not pleasant or well paid. Quaile was not prepared to accept the poor pay and conditions and like many cafe workers of that period she chucked aside her uniform and with her fellow workers walked out of the cafe and went on strike. She set up a Cafe Workers trade union and started her lifelong commitment to trade union activity.

When the First World War broke out in 1914 Mary was one of the brave people who spoke out against it. Not an easy task particularly as at least one of her four brothers was conscripted. When he was invalided out she became his carer.

In 1923 Mary was elected to the General Council of the TUC, one of the first women to do so. In 1925 she went to the Soviet Union as part of a TUC delegation, spending four months travelling across the country and  finding out about the new socialist society. 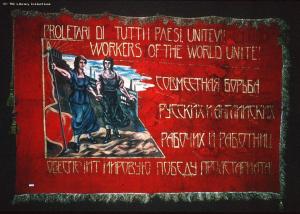 Soviet banner given to the TUC womens delegation in 1925

In 1951 she was awarded the TUC silver medal in recognition of her life’s work as trade unionist. Quaile died in 1958 Her obituary said; her determination to get trade unionism for women accepted was often met with jeers, boos, rotten apples, and threats of violence. She spoke at hundreds of factory gate meetings in both the East End of London and Manchester; she never betrayed any sign of fear when faced with hostility. Her warmth and lovable personality won for her many friends in the labour and trade union movement.”

Her name had been almost forgotten except in the work of Ruth and Eddie Frow of the WCML, who inspired a new generation of historians and activists to research her life. Like many working class women activists of that era, Mary did not write her autobiography and it’s been quite a task for socialist historian Michael Herbert to piece together her life from newspapers and other sources. He says, “Mary was very well-known in her own era as a trade union activist, speaking at countless meetings, but she quickly became forgotten after her death as often happens. We need to remember Mary and other women of that era such as Julia Varley, Anne O’Loughlin and Dorothy Elliott, who were pioneers in organising low-paid women workers, and put them back into the history of the trade union movement.”

In December 2013 the Mary Quaile Club was set up by a group of activists who are determined to remind people of the importance of Quaile. The Club holds regular discussions on working class history and its links with contemporary political issues facing working people in Tory Britain.

As part of Manchester TUC’s May Day in 2016 the MQC are planning a pamphlet and play about Mary’s life to inspire new activists to learn from her life and recognise the value of trade unions.

The pamphlet will tell the story of Mary Quaile’s life: the second half will tell the stories of modern day “Marys”, both young and older women, who are following in her footsteps as activists in their trade union.

Sarah Woolley is a young activist in the BFAWU, a shop steward who is involved in recruiting new union members from the fast food industry into her union. And RMT activist Lorna Jane Tooley a young woman who has been involved in the recent industrial disputes on the Tube. Being a trade union activist has given her the confidence for her to join the Green Party and stand in the 2015 General Election.

And what do these new modern Marys feel about following in her footsteps. Tooley’s response was; “She had some guts and spirit and she is a good role model. Its amazing that she achieved so much.” Woolley commented; “She’s done what I would like to do; lead my shop out on a strike and stand for the TUC”

The MQC has also started fundraising to bring Mary’s life to the stage in a play linking her life with the fast food workers of today:to remind people of her life and show young workers that they can change their lives at work through getting involved in a trade union.
Unite North West Women’s and Equalities Officer, Sharon Hutchinson said of Quaile; “Mary Quaile was a woman ahead of her time. She is a shining example to women of today showing how anything be achieved if you have the determination and commitment. I know the women of my union are proud she is a part of our history.”

The play will be premiered at Manchester TUC’s May Day in 2016 and a financial appeal has now been launched to raise £11,500 to get the play produced. Support has come from both individuals and trade unions including Unite, Unison, BECTU, NUJ and PFA.

I am an activist and writer. My interests include women, class, culture and history. From an Irish in Britain background I am a republican and socialist. All my life I have been involved in community and trade union politics and I believe it is only through grass roots politics that we will get a better society. This is reflected in my writing, in my book Northern ReSisters Conversations with Radical Women and my involvement in the Mary Quaile Club. .If you want to contact me please use my gmail which is lipsticksocialist636
View all posts by lipstick socialist →
This entry was posted in Uncategorized and tagged East end of London, manchester tuc, Mary Quaile Club, Suffragette. Bookmark the permalink.