Posted on October 18, 2015 by lipstick socialist

Suffragette (general release), set in the East End of London in 1912. Maud Watts is a laundry worker who becomes involved in the suffragette movement as it escalates its policy of direct action. Her personal life is destroyed as her political activity takes over her life. Unfortunately Maud is portrayed as a lone working class activist who is ejected from her home by her husband and exiled from her community because of her politics. This omits the real history of the East End of London at this time: it was a hive of militant activity and Maud would have been just one of many working class women who were active in organisations, including trade unions and Sylvia Pankhurst’s East End Federation. One aspect of the film I find really objectionable is the characterisation of the working class men: they are all baddies. Many working class men supported their wives, partners, mothers and sisters in their campaigns for the vote. The history may be skewed but I do think it does show the reasons why many working class women did get involved in the suffragette movement and also (although personally I find her imperious) the incredible charisma of Mrs. Pankurst. But also watch Shoulder to Shoulder a much more reliable history of the suffragette movement with local heroine Annie Kenny which is  only available on Youtube see

about “The Lump”, writer and socialist Jim Allen’s play about the building industry in the 60s, although there are lots of parallels with today. He believed that drama should make you angry, angry enough to want to do something, well this is a monumental expose of capitalism and one man who is not going to put up with it anymore. The film will be shown on Saturday 14 November at the 3MT. Producer Tony Garnett will be there, talking about Jim, the film and why there is no left wing drama on TV today. Advance booking essential, not many tickets left, contact maryquaileclub@gmail.com
Look

at The Phantoms of Congo River: Photographs by Nyaba Ouedraogo. The north west of England has a significant Congolese community, brought here by a war in their country that gets little publicity in the news. In this exhibition we get an insight into another aspect of the history of the country as well as seeing some fantastic photographs. The photographer is self taught and is using a British C19th novel The Heart of Darkness by Joseph Conrad to explore ideas about colonialism and racism. The artist describes the works as ‘photographic poetry’: he says it is not about the reality of life but the language of rituals and the use of the mystical to express his vision, as opposed to describing the reality of life.Also on display are some of the Museum’s C19th objects “taken” from the Congo! Maybe they should give them back. Unfortunately the exhibition is hidden away on the 3rd floor of the Museum so it’s a trek to get to, but worthwhile. Further info see 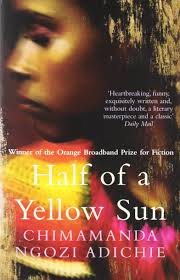 Half of a Yellow Sun by Chimamanda Ngozi Adichie. A reminder of a forgotten war in Nigeria; the Biafran war of 1967-70. Nigeria was a creation of the UK which in the early 1900s  carved up part of West Africa and named it Nigeria – totally ignoring the different ethnic, religious and linguistic differences of the people in this area. After independence in 1960 the growing tensions between different groups led to the attempt by part of the country, Biafra and the Igbo people, to break free. The author is from Biafra, her relatives died in the civil war, and the strength of the book is her insider’s view of the conflict. I liked the story of the two sisters and their constant battle, also the character of Ugwu the young man who becomes the houseboy and much more. It is a novel, not a history, but I found it totally engrossing, compassionate and humane. Buy it from

I am an activist and writer. My interests include women, class, culture and history. From an Irish in Britain background I am a republican and socialist. All my life I have been involved in community and trade union politics and I believe it is only through grass roots politics that we will get a better society. This is reflected in my writing, in my book Northern ReSisters Conversations with Radical Women and my involvement in the Mary Quaile Club. .If you want to contact me please use my gmail which is lipsticksocialist636
View all posts by lipstick socialist →
This entry was posted in Uncategorized and tagged Chimamanda Ngozt Adichie, Congo, Half of a Yellow Sun, Jim Allen, Shoulder to Shoulder, Suffragette, Sylvia Pankhurst, The Lump, Tony Garnett. Bookmark the permalink.