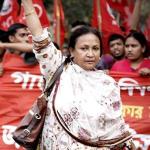 Udita (Arise) a film about the garment industry in Dhaka in Bangladesh. It could be 19C Britain or 20C New York (Triangle Fire 1911). Poor impoverished, mainly women, who have left their villages to join the 4million in factories producing cheap clothes for us. They tell their story in this remarkable film, a story about living in sheds, with wages that barely cover their costs and that are sometimes not paid for months and working long hours with little time to see their children. But the women and men have not been defeated, even after fires at Tazreen and Rana Plaza that have killed and injured thousands of workers. We watch as they become activists in their trade union; the National Garment Workers Federation. The union has been successful in gaining higher wages for the workers and joining with other international organisations to highlight the way in which the workers are being exploited by the industry. Its a difficult film to watch but inspiring for anyone concerned about justice across the world.

out about Aboriginal filmmaker and artist Tracey Moffatt. Her work reflects her background. Tracey’s mother was white and her father aboriginal. It is an aspect of the Aboriginal history that I knew nothing about. In these short films Tracey explores topics including; being mixed race, the lives of young aboriginal women today and the attraction between different races.
Nice Coloured Girls

The World That Never Was A True Story of Dreamers, Schemers, Anarchists and Secret Agents by Alex Butterworth. You might think this is not holiday reading but I found it fascinating. It is set in the last years of the 19 Century and reading it leads one to draw parallels with the kind of society we are living in today. There was great social injustice, economic instability, a cynicism about the democratic system and a capitalist system that seemed to be on the point of collapse. This is the story of the anarchist movement that believed in social revolution although when the time came for action it wasn’t them who took power. The book reminds us on some fascinating characters such as Louise Michel who was active in Paris in 1871 and with a rifle in hand she defended the new republic. Anarchism spoke to peoples’ hopes and dreams for a better world with science playing a major role in transforming society. This book shows how those dreams shaped peoples’ political activity and the world we live in today.

Stockport against the Cuts. The campaign is exposing what it means to be living in Stockport and the effects of cuts in public services. Join them on 23 July at 7pm at Stockport Town Hall for a meeting to discuss the closure of the Well Being Centre and cuts to local mental health services. Further details see

To a production of the Manchester Shakespeare Company, set up by Gina and John of eclectic 3MTheatre. Their aim is show more people the beauty and relevance of 16 century drama. Events include productions of the plays with a Mancunian twist, poetry evenings and readings. It will be different, of that you can be sure!! Further details see

I am an activist and writer. My interests include women, class, culture and history. From an Irish in Britain background I am a republican and socialist. All my life I have been involved in community and trade union politics and I believe it is only through grass roots politics that we will get a better society. This is reflected in my writing, in my book Northern ReSisters Conversations with Radical Women and my involvement in the Mary Quaile Club. .If you want to contact me please use my gmail which is lipsticksocialist636
View all posts by lipstick socialist →
This entry was posted in Uncategorized and tagged anarchism, Manchester Shakespeare Company, Rana Plaza, Stockport against the Cuts, The World that Never Was, Tracey Moffatt, Udita (Arise). Bookmark the permalink.