Posted on June 5, 2014 by lipstick socialist

Occupational Hazards, Occupying Hospitals; some inspirations and issues from our history
produced by past tense 2013

past tense are a group of anarchists who present history from below: this is just one of their thought provoking and important publications. It is a reminder of past struggles when 20 hospitals were threatened with closure between 1976 and 1994 and documents the response of staff and the local communities, which included work-ins or occupations. This pamphlet tells us what happened but also highlights the dilemmas of taking over a hospital. 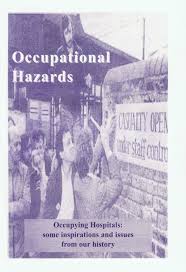 Recording the history of any struggle is difficult. My own experience reminds me of how important it is to collect leaflets, take photos and document what happens but the day-to-day reality of keeping a struggle going means that very often the priority is on the now and not the future and the lessons to be learnt. That is why this is an important book, as the authors (with no contract or financial backing) have produced, not just a history of important struggles, but also a history of how people did things. It poses the question : how useful is this history for those of us involved in present day struggles and campaigns?

One of the big differences today is the level of union activity in health service campaigns. In this book some of the actions were initiated by grassroots trade union militancy which is no longer the case today. In fact many active trade unionists fear victimisation either by the hospital management or by their own trade union bureaucracy. The case of Karen Reissman has had an effect in frightening off many other activists (although not all) in whistleblowing the actions of management in hospitals. Some hospitals, such as Tameside, where there have been public outcry about the way in which patients have been treated have no Unison branch machinery in the hospital and it has led to nurses appearing in disguise on local media reports to report the mismanagement of the hospital hierarchy.

Occupational Hazards produces two in-depth accounts of the South London Women’s Hospital Occupation 1984-5 and the campaign against ward closures at the University College Hospital in 1992-4. These are fascinating accounts of the campaigns with wonderful pictures showing the broad nature of the people involved as well as their leaflets and photos and the media response.

The South London Women’s Hospital campaign involved occupying the hospital for 9 months! It was a campaign that was feminist and took an anti-cuts class struggle perspective; involved consensus decision-making; and used a variety of tactics from barricading the hospital to picketing and demonstrations.

The book is not just about London based campaigns . There is a short article about an occupation and work- in at Thornton View Hospital in Bradford Yorkshire in 1985 which lasted nearly 2 years! it was a long stay geriatric hospital and, after a year long campaign of letters, petitions and demonstrations which had failed, the workers started an occupation which was made official by the trade unions in the first week. The management were evicted and the occupation committee of nurses, domestics, porters, GPs and patients’ relatives ran the hospital. Eventually, as the number of patients declined, the management raided the hospital at midnight and ended the occupation.

In 2014 we are facing major cuts to the NHS and an unprecedented privatisation of the service. The response to this is positive as many groups and organisations are being set up to fight it. But the same questions remain; how do you fight cuts where the traditional methods of petitioning, lobbying end up with a nil response? Do we rely on another Labour government in 2015 to bring back what is gone; or should we learn the lessons of a more radical era as shown in this book? 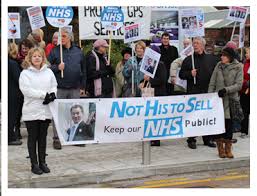 Occupational Hazards ends with a reprint of a pamphlet by London Health Emergency in 1984 which is a guide for hospital workers on how and why to occupy hospitals to prevent their closure. This book is an important addition to the debate about how we campaign against privatisation in the NHS. It also compliments NHS/SOS, edited by Jacky Davis and Ray Tallis, which was published last year. NHS/SOS reflects the position of its authors ,who are part of the medical establishment, and take a different viewpoint in terms of fighting the cuts. They do provide essential information about how the Labour Government in 2009 started the privatisation process and what this means in an organisation that is highly complex and hierarchical. Their answer is to get involved in the many campaigns that have been set up over the last few years and the book provides a whole chapter giving readers vital information about groups to join.

Occupational Hazards is a really important book in that it shows how people can build campaigns to defend services, patients and workers in the NHS. It is inspiring (and sometimes depressing) but it suggests that in the end it may be that only by direct action that we are going to stop the unravelling of our Welfare State. 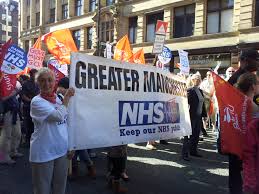 Buy it at
Further info about Greater Manchester KONP see

I am an activist and writer. My interests include women, class, culture and history. From an Irish in Britain background I am a republican and socialist. All my life I have been involved in community and trade union politics and I believe it is only through grass roots politics that we will get a better society. This is reflected in my writing, in my book Northern ReSisters Conversations with Radical Women and my involvement in the Mary Quaile Club. I am a member of the Manchester and Salford National Union of Journalists.If you want to contact me please use my gmail which is lipsticksocialist636
View all posts by lipstick socialist →
This entry was posted in anti-cuts, book review, education, labour history, NHS, political women, Tameside, trade unions, women, young people and tagged Gtr Mcr Keep Our NHS Public, karen reissmann, NHS SOS, Past Tense. Bookmark the permalink.