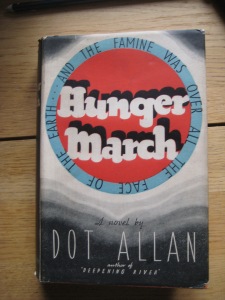 Is it 2014 or we are going back to the 1930s? Instead of mean testing we have the bedroom tax, two weeks ago Labour joined the ConDem government in voting for a cap on benefits which really means a cut, and this week unemployed people are going to be forced into working for nothing.

Dot Allan’s(1892-1964) book, Hunger March was written in the 1930s, set in Scotland, more than likely in her home town of Glasgow. Scotland had one of the most vibrant unemployment movements, led by Harry McShane, the veteran communist. He led the National Unemployment Workers’ Movement in a march from Glasgow to Edinburgh in 1933. When the marchers reached Edinburgh they camped out for 3 days and it became known as the Scottish Hunger March.

Dot obviously observed this march and chose it as her subject for this novel. The events all take place in one day as the hunger marchers descend on the city.

Dramatically the book opens with;
“It was one of those days when you felt God had forgotten the city.”

There are lots of religious references but don’t let this put you off a well written and compassionate novel. What makes it insightful is the way in which Dot uses her characters to reflect on the political situation.

From Arthur Joyce the wealthy industrialist who decides to close his business to Mrs Humphrey, his cleaner, who is concerned about her unemployed son who goes on the march. Even Nimrod (maybe McShane) the march leader, is included in the drama, saying to Jimmy, the journalist; “The whole system offends me. It stinks because of the corruption it is founded on.”

In the Palatial cafe one of the waitresses, Fanny, who knew what it was to try and live on the dole, felt sympathy for the marchers:
“She was visited by a wild desire to throw open the window, to call out to those below to hold out their hands and catch….She would have liked to strip the tables for their benefit, to snatch the mutton pies, the fried fish from under the noses of the smug eaters.”

Central to the novel is the story of Joe, an unemployed young man who lives with his mother. She can get work as a cleaner at the houses and offices of the rich. It rings so true for 2014 as we have more than 440,000 young people, many of them young men, who are experiencing long-term unemployment.

On the march Joe looks up at the offices of Joyce and Son where his mother works. “Would she still be there, he wondered, bent double on her knees, scouring and scrubbing? “I’ll lay, he said to himself with a queer little flick of pride, “she works harder than any of them. And she doesn’t ride in her motor car to her work either!”.

Another young man, Jimmy, a reporter, is cynical about the march and decides to take part to find out what is going on. As the march is attacked by the police he falls to the ground.

“An underdog literally for the first time in his life he saw things from the under-dog’s point of view. He saw despair like a current whorled river, enveloping the people until, buffeted and exhausted, their sense of perspective ran mad.”

Hunger March is an important book for today because in it Dot shows how we are all affected by the position of the most vulnerable people in society. In the 30s there was a vibrant unemployment movement led by the Communist Party but sadly today, with similar high levels of unemployment and poverty, we have yet to see any organisation appear that truly represents the position of the poor in society and has in its leadership the likes of Harry McShane and women such as Maude Brown and Lily Webb.

Makeshift and Hunger March: Two Novels by Dot Allan were reprinted in 2010 buy them at

I am an activist and writer. My interests include women, class, culture and history. From an Irish in Britain background I am a republican and socialist. All my life I have been involved in community and trade union politics and I believe it is only through grass roots politics that we will get a better society. This is reflected in my writing, in my book Northern ReSisters Conversations with Radical Women and my involvement in the Mary Quaile Club. .If you want to contact me please use my gmail which is lipsticksocialist636
View all posts by lipstick socialist →
This entry was posted in anti-cuts, book review, Communism, drama, feminism, human rights, labour history, political women, Socialism, women, young people and tagged Dot Allan, Harry McShane, Lily Webb, Maude Brown, National Union of Unemployed Workers, Scottish Hunger March. Bookmark the permalink.