Posted on April 6, 2014 by lipstick socialist

Watch…The Past (2013/ Cornerhouse)….Ahmad comes back to Paris to sign divorce papers so that Marie, his soon to be ex-wife, can marry Samir. But does she really want a divorce? As the film progresses Ahmad becomes intertwined in the complex relationships of his wife, her children and her new man. Interesting to see the ethnic mix of North African, Iranian and French couples. There are several children involved who play main roles in what is essentially an adult drama. It points to the way in which people now have complex relationships and the consequences of the choices that we all have to make sometimes. Sometimes painful to watch, particularly the reaction of the children to the anguish of the parents, but a fascinating insight into relationships today.

Read… Settling Scores: The Media, The Police and The Miners’ Strike by Granville Williams. It is 30 years since the Miners Strike and those of us who were involved are aware of the way in which the strike was only a symptom of the state’s war against those who want a different kind of society. In this book, published by the Campaign for Press and Broadcasting Freedom, the contributors review the news coverage at the time and assess the information that has emerged during the intervening years, not least in the 1984 cabinet papers of Conservative Prime Minister Margaret Thatcher. See
Granville is speaking about the book in Manchester on 29 April. Further information see

Find out about…Delia Derbyshire… spend time with the Delia Darlings on Saturday, April 12th, 2014, 7:30 pm. Delia was a pioneer electronic music composer with the BBC Radiophonic Workshop. Listen to a new commission by composer/musician Daniel Weaver and a new digital visual art work from new media artist Andrea Pazos, both created in response to the Delia Derbyshire archive in Manchester, UK. The evening will also feature an audio-visual collage of the Delia Derbyshire archive by David Butler and Sarah Hill, and performances from Caro C and Ailis Ni Riain. Further info see

Go to....Jacques Brel is Alive and Well and Living in Paris, theatre company Gambolling Arena’s own take on the off-Broadway show. Brel was one of France’s most well known singer/songwriters and has inspired many other performers from Scott Walker to David Bowie. This new play is written from the viewpoint of his daughters, intermingling their father’s songs and thoughts to tell his story. Sounds fascinating and is on at the innovative 3Minute Theatre on 25th & 26th April Box Office Number – 0161 834 4517

Want to know more about Scottish independence……watch this fantastic lecture by Tommy Sheridan. You can see why Scottish progressive people want their own country and maybe if it does happen it will lead to a more open debate in the rest of the so-called United Kingdom about the relationship between the peoples of England and Wales. There is no debate around Ireland…but it is one country and the British should get out.See

Visit a veggie cafe.…Pulse in New Mills is more of a community cafe than your usual eatery. It is child friendly, displays local artists’ work and has live music one night a week. Food is prepared daily by chef Paul Barrett and you can follow him on his blog Vegetarian dad and use his recipes.

Celebrate May Day… and remember Tony Benn. CND are organising a peace picnic in Heaton Park at the Peace tree from 530-730pm on May 1st. Bring your food and memories of Tony. There will be readings from his life, poetry and a song or two.

The case of the vanishing library staff.……..Central Library in Manchester opened last week after £48m being spent on its modernisation. The 1936 building looks good and in many ways it is an improvement but what seems to be missing is the staff to make it work!! Jill Woodward says it all in this cartoon. 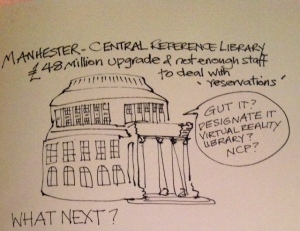 I am an activist and writer. My interests include women, class, culture and history. From an Irish in Britain background I am a republican and socialist. All my life I have been involved in community and trade union politics and I believe it is only through grass roots politics that we will get a better society. This is reflected in my writing, in my book Northern ReSisters Conversations with Radical Women and my involvement in the Mary Quaile Club. .If you want to contact me please use my gmail which is lipsticksocialist636
View all posts by lipstick socialist →
This entry was posted in anti-cuts, book review, drama, feminism, films, human rights, labour history, Manchester, music, peace campaigns, political women, Uncategorized and tagged Campaign for Press and Broadcasting Freedom, Delia Derbyshire, Jacques Brel, Manchester Central Library, Tommy Sheridan, Tony Benn. Bookmark the permalink.