The Spirit of International Women’s Day 2014

Posted on March 6, 2014 by lipstick socialist

International Women’s Day was created to offer hope to working class women that they could collectively get together with other women (and men) to improve their lives. That was in 1911 and, although women’s lives have improved dramatically since then, over the last few years, for some women, life has become much worse. In this article I interview Charlotte, who lives in Ashton-under-Lyne, the town where the radical suffragist Hannah Mitchell lived in the early 1900s and took part in the socialist movement. Charlotte is part of the new generation of activists who are not prepared to put up with being treated shabbily by the government – and are doing something about it!

It was a cold, dark evening in Ashton-under-Lyne town centre when I first met Charlotte Hughes and her 7 year old, Tallula. She was there as part of Tameside against the Cuts who were lobbying Tameside Council about their use of bailiffs to extract council tax debt from some of the poorest people in the borough. 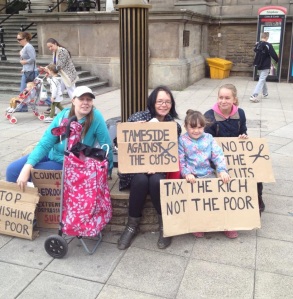 Charlotte and Tallula second and third from the left.

She said:”I am fed up being poor. I have to stand up against the Council and I don’t have any choice. I am angry about the way I have been treated by the Job Centre and Workfare organisations. They think they can treat me how they want and get away with it.”

Charlotte is a single parent with 2 grown up children and a 14 year old and 7 year old. She comes from a working class family of Latvian/Estonian extraction.
“My grandmother, who was Latvian, brought up 8 children. She was a matriarch as was my Mum. I have learnt a lot from them.”

Growing up during the Thatcher era affected her view of the world. “My father was an engineer and lost his job and never worked again. He hated the Tories for what they did to areas such as Tameside and now I see things going backwards.”

Being a mother of two children with learning disabilities has made Charlotte tough. “At that time I did not get much help with supporting my children. The authorities treated me as a ‘bad mother’. But it just made me stronger as a mother and a woman.”

Charlotte is appalled by the way single parents are treated in the benefit system.
“It is degrading and they do not take into account that you have to take children into consideration when they send you for job interviews.”

She is not prepared to be treated in this way and has challenged the Job Centre and taken complaints to her local M.P. Charlotte has used her knowledge of the benefit system to help other people who are also being targetted unfairly by the Job Centre.

Charlotte takes Tallula with her on all her demos and protests. She is active in Tameside against the Cuts, the Peoples Assembly, the Green Party and Barton Moss Camp.

Tameside against the Cuts

“It is really important that she learns to stand up for herself. This country is not going to get any better unless people stand up for their rights.”

She sees herself as a feminist and an equalist. “Women can do anything a man can do but it is not about being better than anyone else. ” She lives on her own with her children. “I am very happy on my own and I impress on my children that they don’t need someone else to make them happy”.

Charlotte is fearful for the future, particularly for her children, but she has hope that life can get better.

“International Women’s Day is important as it shows women that we are more than just a wife or mother and that we have the power to stand up for our rights. We are not second class citizens.”

I am an activist and writer. My interests include women, class, culture and history. From an Irish in Britain background I am a republican and socialist. All my life I have been involved in community and trade union politics and I believe it is only through grass roots politics that we will get a better society. This is reflected in my writing, in my book Northern ReSisters Conversations with Radical Women and my involvement in the Mary Quaile Club. I am a member of the Manchester and Salford National Union of Journalists.If you want to contact me please use my gmail which is lipsticksocialist636
View all posts by lipstick socialist →
This entry was posted in anti-cuts, feminism, International Women's Day, labour history, political women, Socialist Feminism, Tameside, women, young people and tagged Ashton-u-Lyne, hannah mitchell, Tameside against the Cuts. Bookmark the permalink.

1 Response to The Spirit of International Women’s Day 2014