The Government call it an “Under occupancy penalty”, but its now universally known as “the Bedroom Tax” to all those people whom it affects. And those people are some of the poorest and vulnerable members of society. The Bedroom Tax affects social housing tenants of working age with so-called spare bedrooms, who will lose 14% of their housing benefit for one room, and 25% for two or more. The average loss of housing benefit is £14 per week. Nationally 660,000 people have been affected by the tax, of which two-thirds are people with a disability.
The North West is particularly hard hit by the tax because our towns have more traditional and larger ex- council properties and there are less one and two bedroom properties.

The Department for Work and Pensions claims that the tax is fair and it will either “encourage” or “persuade” families which it claims are “over-occupying” to move out, freeing space for others on the housing waiting list, a list which the Tory-led Coalition has allowed to become hugely over-subscribed due to its failure to invest in building new social housing stock.

But the only place for these families to go is into the more expensive, poorer maintained private rented sector. Again they may find themselves in the same position, and end up going into arrears and facing eviction.
They could then end up in homeless families accommodation, not a pleasant prospect, and a pricier alternative for the local authority.

Some councils have taken a radical approach including Leeds, Nottingham and North Lanarkshire and have been re-classifying spaces in their housing stock as box rooms, studies or non-specific rooms, to help tenants avoid paying the tax.

There have been significant increases in levels of overall poverty in Tameside from 2008 to 2010 due to the economic downturn and this is reflected in the rise in the numbers of people claiming Job Seekers Allowance and out of work benefits.

Today a campaign was launched in Tameside to challenge one of the largest social landlords; New Charter who own most of the ex-council property. Already 1700 of their tenants who have been affected by the Bedroom Tax are in rent arrears. So what are they going to do about it?

Ian Munro, chief executive of New Charter Housing Trust Group said: As a housing association that cares about the welfare of its tenants, we’ve been against the ‘bedroom tax’ from the beginning and we’ve been in touch with the Prime Minister to express our concerns.
“Now the Government’s changes are here, our role is to support all tenants through the changes as much as possible but will not be reclassifying properties for those affected households as we do not believe that this is the right way to tackle the issue. As in all cases we may need to take formal action to recover outstanding rent due but this is always a last resort.

Bedroom Tax Campaign organiser Steve Starlord explains how it has affected him;
I have lived in my 2 bedroom house for 29 years, originally it was a council house and like other people I opposed its transfer to the New Charter Housing Trust. I have now been told that I have 1 excess bedroom although no-one from New Charter has actually inspected my property. I have had several letters from New Charter saying that I am now in arrears and each letter has had a different amount on it. New Charter have threatened me with eviction but that is against the law as they cannot start proceedings until I am in arrears over 8 weeks. 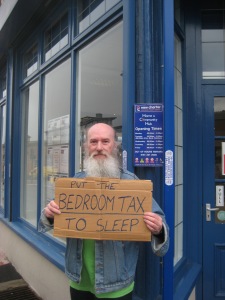 Steve has been involved in many campaigns over the years and is knowledgeable about the law and his position as a tenant. He is concerned about those more vulnerable tenants who do not know their rights and will be forced out of their property.

I have called on New Charter, who say they are opposed to the Bedroom Tax, to work with the tenants to oppose it, give us a room to work in, a small amount of funding and we can work together to get rid of it.

He has not had a reply from NC and he now feels that it is only by tenants getting together to refuse to pay the Bedroom Tax that it will make NC change their policy.:

I am proposing to tenants that we engage in a Tameside-wide RENT STRIKE as a course of counter-action that bats the ball squarely back into the RSL’s court!

Steve believes that from October when tenants will get their Housing Benefit paid directly to them (instead of at the moment when it goes straight to the Landlord) the power will shift and tenants will be able to go on rent strike.
Like the Poll Tax in the 80s the Bedroom Tax may be catalyst for a mass grassroots movement against the government and it policy of attacking the poorest sections of the community. 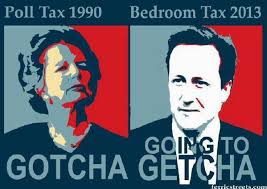 Across Britain campaigns are starting up with the motto “can’t pay, won’t move” this month every Housing Association and Social Landlord from across the country will be in Manchester and campaign groups will be showing their opposition to the Bedroom Tax and will be asking housing providers to join with tenants in defence of social housing .Tenants will be seeking a meeting with CIH organisers to ask if they can address the conference to explain the views of tenants hit by the Bedroom Tax.

Steve can be contacted on; steve.starlord@sky.com
Further information see

I am an activist and writer. My interests include women, class, culture and history. From an Irish in Britain background I am a republican and socialist. All my life I have been involved in community and trade union politics and I believe it is only through grass roots politics that we will get a better society. This is reflected in my writing, in my book Northern ReSisters Conversations with Radical Women and my involvement in the Mary Quaile Club. I am a member of the Manchester and Salford National Union of Journalists.If you want to contact me please use my gmail which is lipsticksocialist636
View all posts by lipstick socialist →
This entry was posted in anti-cuts, human rights, Tameside and tagged bedroom tax, housing benefit, new charter. Bookmark the permalink.