28 April is the 81st anniversary of the day in 1932 when over 400 women and men from the Lancashire branch of the Communist inspired British Workers Sport Federation took part in a mass trespass on Kinder Scout to establish the principle of the people’s right to roam. The trespass was controversial at the time, being seen as a working class struggle for the right to access the countryside versus the rights of the wealthy to have exclusive use of moorlands for grouse shooting.

In 1891 in Colne a Congregationalist minister, T.A. Leonard, had different ideas about why working people should take to the hills and he set up an organisation which would offer walking holidays in the Lake District and beyond to the millworkers where he lived. He frowned upon the annual trip to resorts such as Blackpool and Morecambe:

This kind of holiday leads to thoughtless spending of money, inane types of amusement and unhealthy crowding in lodging houses.

Leonard therefore set up a rambling club, and organised a holiday to Ambleside for the summer of 1891. Over the next few years the group travelled to Keswick and as far as Caernarvon in North Wales. The template for the holiday was a break for four nights, with 30 people in the group, enjoying basic accommodation. Leonard summed it up:

In those days we were content with very primitive arrangements, so long as they gave us the joy and freedom of the open fells. All we needed was food, beds and good fellowship.

In 1897 a small company was formed called the Co-operative Holiday Association (CHA). Leonard resigned as a minister and became its full-time General Secretary, based in one of their properties, Abbey House, in Whitby, Yorkshire.

In the early 1900s he numbers of centres owned by the CHA grew and by 1913 they had 18 centres, including five overseas.

But Leonard felt that origins of the CHA had been diluted and that it had become a middle-class, conservative organisation. So the Holiday Fellowship was launched to provide simple adventurous holidays with an emphasis on youth and expanding their trips to overseas, the aim being to provide an all inclusive holiday for the price of an average weekly wage. 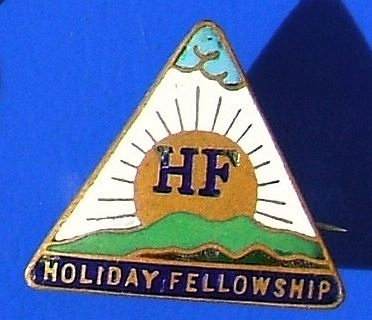 The headquarters was now in Conwy and several other centres were purchased in Yorkshire and near Stranraer, as well as transferring a centre in Germany from CHA to the HF.

Prices for the holidays varied from 25/- per week at the Newlands centre in Derwent Bank plus 4/6d for walking excursions to £5/10/6 per week in Germany. A trip to Germany in the summer of 1914 led to two of the tourists being interned for the period of the Great War!

Singing was an integral part of the HF holiday, and until 1933 there was always a song book included in the programme. The songs ranged from religious hymns to the popular tunes of the day.

The Second World War led to the closure of many of the centres and saw guest numbers fall to 14,500 in 1943.
T.A. Leonard died In 1948, aged 84. An activist all his life he had not just been involved with the HF but had also been involved with the creation of the YHA, the National Trust and the Ramblers Association.

The HF (now called HF Holidays) has continued and this year celebrates its centenary. Its head offices are in Cumbria and Hertfordshire and it is the UK’s largest walking holiday company. It maintains its links with the Ramblers Association and is their recommended walking holiday partner. It works with other organisations such as the Outdoor Industries Association to help preserve wild land and wildlife.

Walking is still a popular activity and may become even more attractive to the public given the economic downturn. HF has seen the number of its walking groups double over the years. Holidays with HF can mean travelling to 113 destinations in 46 countries across the world. All its group leaders are volunteers and HF is still a co-operative so it returns its profits back into the organisation to improve the holiday experience of its guests.
For more information about HF see

I am an activist and writer. My interests include women, class, culture and history. From an Irish in Britain background I am a republican and socialist. All my life I have been involved in community and trade union politics and I believe it is only through grass roots politics that we will get a better society. This is reflected in my writing, in my book Northern ReSisters Conversations with Radical Women and my involvement in the Mary Quaile Club. .If you want to contact me please use my gmail which is lipsticksocialist636
View all posts by lipstick socialist →
This entry was posted in book review, labour history, music and tagged CHA, cooperatives, Hf Holidays, kinder trespass, T.A.Leonard. Bookmark the permalink.