Posted on December 20, 2012 by lipstick socialist

We are living in the age of austerity. As a socialist and a writer my aim in life has always been to act collectively in my union, my neighbourhood and with my friends to make the world a better place. But in 2012 it is hard looking around to find organisations that give a lead and, most importantly, offer hope to achieving a better future.

Tom Paine, philosopher and revolutionary, wrote We have it in our power to begin the world over again. Five Leaves Publications in their latest book Utopia have reminded us of how important it is for all progressive people to have a vision for the future. 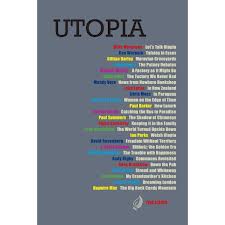 The book includes a mixture of essays from past and present writers.

Mike Marqusee in his essay Let’s Talk Utopia sets out the case for utopian thinking:

We need the attraction of a possible future as well as a revulsion at the actual present. If people are to make the sacrifices required by any struggle for social justice, then they need a bold and compelling idea of the world they are fighting for.

Utopia is not a new concept and has a fine tradition in this country. Earlier this year, for instance, I attended the 2nd Diggers Festival in Wigan which lauded Gerald Winstanley of the True Levellers (aka The Diggers). They did not just dream about a utopian lifestyle, but in 1649 occupied St.George’s Hill to set up a colony on common lands, cultivating the soil and distributing the crops without charge to their followers. Utopia includes Leon Rosselson’s song The World Turned Upside Down which encapsulates Winstanleys’ dreams:

A song for 2012 as the bankers are bailed out by the government, our public services are being dismantled and poor people are having their benefits cut. The Wigan festival will hopefully become an annual starting point for activists, not just a get together but to look at campaigning on these issues.

Gillian Darley in her essay Equal in Death: the Moravian Burial Ground explains how the Moravian community has survived whilst others, such as the Shakers, have disappeared. The English Moravian settlements were founded in the 1700s near Manchester, Leeds and Belfast. Originally from Germany the Moravian missionaries took their message across the world, establishing communites based on economic self sufficiency and close communal ties:

They observed the egalitarian customs and norms of their own society …and while their contemporaries lived bound by a mesh of intricate social gradations and subtle measurements of class and conditions, the Moravians – largely artisans- had effectively absolved themselves from all this in favour of equality in life and death. 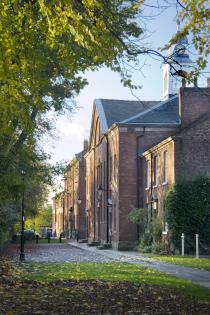 The Moravians understood the importance of linking work with home life and, in his essay on William Morris, Colin Ward explains why the latter is still an important socialist thinker for us today. He quotes Paul Thompson, biographer of Morris:

Morris stands alone among major socialist thinkers in being as concerned with housework and the home as work in the factory. The transformation of both factory and home was equally necessary for the future fulfilment of men and women.

Utopia includes Morris’ own essay A Factory as it Might Be in which he sums up his vision of creating factories that would combine work and pleasure, extol training and education, as well as art and culture. He believed that machinery should be used to save the time of the worker so that s/he would have time to develop their own individual artistic and cultural needs.

Morris’ ideas of a modern factory were taken up by some employers, including William Lever at Port Sunlight and George Cadbury at Bournville, but they were never the norm for most people. And as Colin Ward points out, capital has eliminated labour and, in its drive for lower labour costs, it has relocated to China and Latin America.

Public anger about tax dodging organisations, including Amazon, will hopefully remind people about why co-operatives such as the News from Nowhere bookshop were started in the first place and why they are even more important today. NfN started in 1974 and became a co-operative in 1984. One of the founders, Bob Dent, explains why they took the name of William Morris’ book News From Nowhere:

To create that better world which William Morris envisaged in NfN, we need ideas which counter the prevailing ideologies. Access to alternatives, creative radical ideas,which help us challenge the different power structures of society, is not a sufficient condition for changing the world, but it is a necessary one.

In Mandy Vere’s contribution about News from Nowhere, we are shown how collective action can produce radical workplaces and centres for political activity.

Her essay is insightful on how they created the co-operative and decided to make it women only and the response this got, not just the customers, but from sections of the more traditional left. One of the strengths of the cooperative has been its openness to all political movements, individual activists from the left and all strands of progressive thought.

Utopia is a good book to read to inspire and motivate ourselves and make us think about trying to encourage other people to join us and become more politically active.

Through Lipstick Socialist over the past year I have interviewed many individuals and groups about their political activity and how they see the future. There are many positive things going on, particularly in terms of new groupings, and people trying to work together on many issues from opposing the public sector cuts to encouraging more people to learn their own history.

If we as socialists want to see more people become involved in creating a better society, a utopian society, then we need to engage with the majority of people who are not active and show them that it is possible to live in a more collective and compassionate way. To quote Oscar Wilde:

A map of the world that does not include Utopia is not worth even glancing at, for it leaves out the one country at which Humanity is always landing. And when Humanity lands there, it looks out, and, seeing a better country, sets sail. Progress is the realisation of Utopias.

Season’s greetings and see you in 2013 in a utopian society!

I am an activist and writer. My interests include women, class, culture and history. From an Irish in Britain background I am a republican and socialist. All my life I have been involved in community and trade union politics and I believe it is only through grass roots politics that we will get a better society. This is reflected in my writing, in my book Northern ReSisters Conversations with Radical Women and my involvement in the Mary Quaile Club. .If you want to contact me please use my gmail which is lipsticksocialist636
View all posts by lipstick socialist →
This entry was posted in anti-cuts, book review, Communism, feminism, human rights, labour history, Manchester, political women, Socialism, Tameside and tagged Five Leaves Publications, leon rosselsonmoravian settlement manchester, levellers, Mike Marquse, news from nowhere bookshop, Tom Paine, Utopia, William Morris. Bookmark the permalink.