Posted on December 13, 2012 by lipstick socialist

In the 1930s,  at a time of national and global economic meltdown (sounds familiar) the coalition  government cut the benefits of the poor. In those days trade unions were not interested in the unemployed so a militant group – the National Unemployed Workers Movement –  was formed to organise those thrown out of work and  challenge the government. In 2012 as the economy declines – and the rich get richer – once again a coalition government wants the poor to pay for their crisis. Only this time, unlike the 30s,  people are much more isolated and lack the community cohesion that was a part of the fightback that made the NUWM a successful organisation. 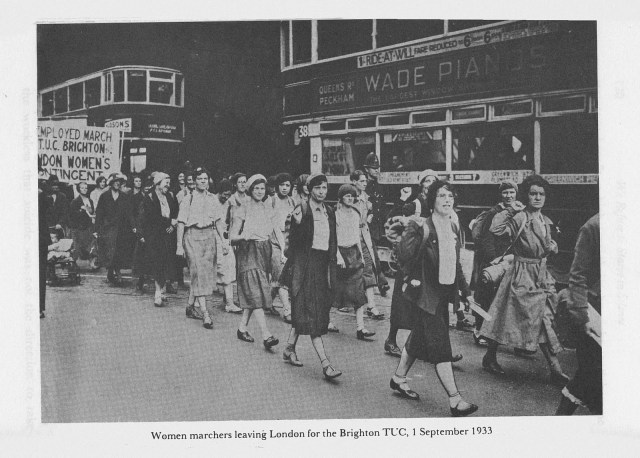 As a life long trade unionist and activist I was pleased to see my union, Unite,   a year ago appeared to  address the issue of representing and organising the unemployed, particularly as I too became a victim of the ConDem’s  stripping of services and workers from the public services.

Unite’s mission is to organise people to strive for a society that places equality, dignity and respect above all else. But our union recognises that we can only achieve this if we bring people together from all walks of life.

Even now in the 21st century, too many people in our country are being pushed to the margins of society. They deserve to be heard; they too deserve the support to organise collectively. It is with this in mind that Unite has founded its community membership scheme.

Unite’s community membership scheme brings together people from across our society.  Those not in employment are welcomed into the union family, adding another dimension to our strength in thousands of workplaces across the UK.

Coming from a trade union family when I was made redundant one of the first things I did was to change my membership to that of an unemployed member. The Greater Manchester Unite Community Union was launched in June last year, but I only heard about it from a journalist friend, not from Unite. Eventually in November I decided to go along to a meeting and find out what is being offered by Unite to the unemployed.

The meeting was not like any Unite meeting I have ever been to, in fact it was similar to many community meetings that I have been involved with over the years. People sat in a circle and there was little in terms of a formal agenda. And it showed one of the major issues for a community union, bringing together two different political cultures; that of trade unions and community organising.

There was a fair representation of people at the meeting, including women, younger people, people on benefits, ex-students, and older people.  Apart from me, there did not appear to be any other unemployed Unite members there. There was a Unite shop steward from a local council, a Unite member working in private industry and a PCS shop steward.  I was puzzled by this because the latter presumably have their own branches to be active in and therefore do not need a community union .There were also two students who said they were going to set up a community union  in their university. Now I know the Unite publicity does mention students, but to me students already have their own organisation, the NUS, to be active in, so why would you want to set up a Community Union branch in a university?

There were a number of people from the local Unemployment centres in Salford and they made some important contributions, including offering access to computers (very important these days for people who want to sign on for benefits or maintain their benefits) and help for those experiencing  problems with their benefits. The issue of benefits is a crucial one for any CU, as far as I am concerned, as those receiving benefits  are being targeted by the Con-Dem government and,  like the 1930s, are suffering  severe cuts in their money.

Information was given out about the changes,  including the new Universal Credit,  and concern was raised about the way it was being trialled at local Benefit Offices .  A man who worked at a solicitors offered to train up members of the CU in welfare rights,  which was a really positive contribution. The question was asked if Unite would pay for this but the answer was no, Unite would only pay for functional skills training.  I was quite shocked by this as Unite is a rich union, and, as many unemployed people are paying their dues,  this would be one way for  the union to   provide a crucial support service to  some of the most vulnerable people in this country. Whilst it is good that one individual offered the training, I know,  having worked with young people and benefits, that the system is complicated and that  it is important to  keep up to date with  all the changes. Welfare rights work is highly skilled, and given the challenges made by the Benefit Service,  it is important that the people who represent claimants are clued up on the system.

The use and mainly abuse of the Work Programme is a big issue for claimants, never mind that it has been shown not to work anyway. One of the people at the meeting was on the WP and wanted support with the way in which people are poorly treated. Another person spoke about the way in which the WP is being used for some firms at Xmas to fill their vacancies.

Throughout the meeting I kept wondering what was the link between the people sat in this room and Unite.  Reference was made to Sheila Coleman,(respected activist from the Hillsborough Justice Campaign)  who in September 2012 was  appointed as the new Community Co-ordinator for the North West for Unite. In the Liverpool Echo she commented;

Across the North West many communities feel like they do not have a voice. Unite community membership is going to help change that. We think it is time that people who do not have a job for whatever reason are now going to have access to the benefits of trade union membership.

What isn’t clear is how this access and benefits of trade union membership can be translated into providing the support that unemployed people need and are Unite prepared to put their money where there rhetoric is.

At the meeting it was inspiring that many of the people did want to get involved in activities ranging from recruiting people to the community union to actions around the cuts and anti-poverty initiatives. But without a base to operate from, and without some resources to fund campaigns it is hard to see how it can happen.  I did try to contact Sheila Coleman to discuss these issues, but I have not had any response.

What came out just at the meeting I attended was the need for an organisation which would stand up for the unemployed, that would publicly challenge the government over their policy on cutting benefits, that would provide the unemployed with the support to challenge individual claims and,  like the NUWM,  offer them the comradeship and sense of solidarity that is the hallmark of a good trade union.

At the meeting a banner was produced for the organisation with Unite’s logo, the name of Gtr Manchester Community Union with the message Fairness, Justice, Respect admirable values for any organisation but the trick is to turn aspirations into reality.  I would welcome responses to this article.

I am an activist and writer. My interests include women, class, culture and history. From an Irish in Britain background I am a republican and socialist. All my life I have been involved in community and trade union politics and I believe it is only through grass roots politics that we will get a better society. This is reflected in my writing, in my book Northern ReSisters Conversations with Radical Women and my involvement in the Mary Quaile Club. I am a member of the Manchester and Salford National Union of Journalists.If you want to contact me please use my gmail which is lipsticksocialist636
View all posts by lipstick socialist →
This entry was posted in anti-cuts, disabled people's campaigns, labour history, Manchester, political women, Salford, trade unions, young people and tagged Gtr Manchester community unions, Salford Unemployment centres, Sheila Coleman, Unite, Work Programme. Bookmark the permalink.