Book review: At the Coalface; My life as a Miner’s Wife by Catherine Paton Black

Posted on November 22, 2012 by lipstick socialist 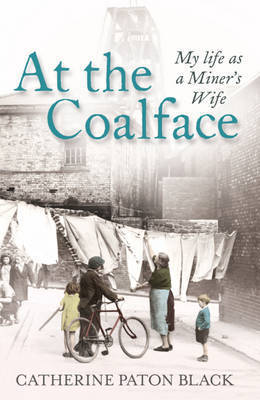 Many books have been written about the Miners’ Strike 1984-85, but few have been written by the wives of the miners. Catherine Paton Black’s book is important, not just because of her husband taking part in the strike but because she was one of the few women who were NUM members and became official pickets during the strike. It is also the story of why those mining communities had such a sense of solidarity during the strike; they realised that, without those jobs and their union, their lives would be one of poverty and instability. This is why they put up such as fight for their jobs and communities and why they were such an inspiration to people in Britain and across the world. It was also the reason why they were dubbed “the enemy within” and why Thatcher was determined to destroy them.

Catherine was born in 1946 in Hamilton, near Glasgow. She came from a poor background:

My father,George was a drunk gambler, always looking for a quick buck to pour down his throat, and my mum suffered a heart condition all her life and struggled to cope. Luckily my grandparents stepped into the breach and became my heroes.

At an early age she was aware of her future:

from a young age us girls knew our fates. We’d grow up to be wives and mothers like our mums and maybe get a job in a factory if we had to. That was our lot in lives and we didn’t know any different.

Catherine left school at 15, got a job in a factory and spoke out when she realised that they were earning very little in comparison to the profits the company was making:

The strike never happened, but the seed had been planted. Even the lowliest paid worker had a voice if they wanted to use it. Little did I know that was a principle I’d stick to much later in life.

Tradition in those small communities wasn’t just about what women did and what men did, it was also about who you married. Catherine meets Doug and when he comes to meet her granddad asks him straightaway What colour are you?, referring to religion. Catholics and Protestants did not mix, so her granddad was relieved when he found out Doug was “blue” ie Protestant.

Through her relationship with Doug she gives the reader an insight into the horrors that his father and brothers experienced as miners;

Working conditions in the pits in the 40s and 50s were primitive. Before the modern machines arrived Doug’s father and brothers were at times quite literally going at parts of it with a pick axe…They were all injured at some point.

If young men didn’t want to go down the coalmines they had few other choices and for Doug that meant going in the Army. In 1968, when she had their first child, he left the Army and took the only other alternative, a job in a pit in Nottingham in England, but as a surface worker. There were other advantages, as Catherine says, after living in a tenement in Glasgow they now were given:

A smart new Coal Board house, with clean red bricks, it really did feel like a piece of heaven after where we had been living. The village, pronounced “Renoth” by locals, had been built especially for the pit and had some lovely rolling green fields, farmland and lake areas nearby.

Catherine was also now living near her Mum and sister, who had moved south several years previously. Catherine and Doug had five children. His work on the surface did not pay enough to keep the family so she went back to work. Eventually Doug went down the mine to improve his wages while Catherine joined him in the colliery canteen (and joined the union). Unfortunately he had an accident in the pit, injured his back and could not go back underground, so the Coal Board found him another job at the pit;

So Doug started a new role on the surface in an office alongside two poor fellas who’d lost their legs in terrible accidents.

During the Miners Strike of 84-85 the Nottinghamshire coal field had many miners who did not support the strike and Catherine believes that this was because :

the mines in Notts employed lots of people from all parts of the country so fewer people felt a sense of loyalty to the area.

Controversially pickets from Yorkshire visited their area to try and get them to join the strike. Catherine did not support this;

As much as I supported the strike, I resented this. We didn’t want or need people from another county telling us what to do, but I did just wish more Nottingham communities were joining in.

Like many people from the coalfields she could see the government’s strategy of provoking the miners into striking at a time when they had been stockpiling coal at the power stations. As she puts it:

It all seemed terribly cynical, like open war had been declared on miners. Yet they were decent, hard- working people who just wanted to protect their jobs and communities.

Many miners wives got involved with the strike, but Catherine was different because she was an NUM member and she could officially join the picket line. Her husband didn’t want her to so she went one morning with her daughter;

After shinning down the drainpipe, we walked into the street, where we spotted other people coming down the road.
The other women commented;
We’re off to find a demonstration. We can’t just sit at home cooking and cleaning while all this is kicking off. 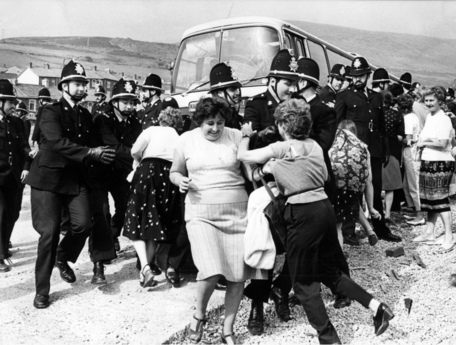 Catherine throws herself completely into political activity. She organises the soup kitchen and attends pickets, demos, travels around the country and comes across other peoples ways of life that she never knew existed. But she wasn’t interested in the bigger politics of the strike as she comments:

We had them all up here, including Scargill, but I never took time to listen. I wasn’t interested. …I was too busy to think or consider any further issues or the politics of it all

For many miners’ wives (and miners) the strike showed them different ways of life and some of them took the opportunity to get an education and jobs and move away from the coal mining communities. Catherine was happy with the life she had, and after the strike ended she returned to her husband and family. And her feelings today about the strike?

Echoes of its legacy lives on. We’ll bear both the scars and the memories forever. 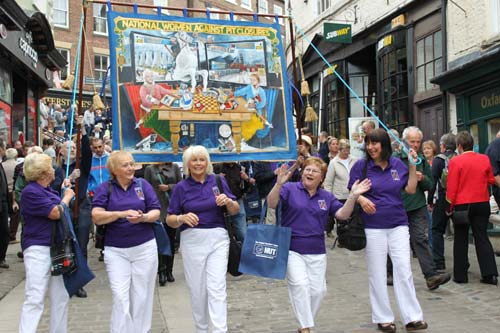 In 2012 with growing dissent about energy costs it is even clearer that the demise of the coal mining industry was not just a defeat for the NUM and its members, but has left this country now hostage to large energy companies with a government that has no sympathy or concern for poor families.

At the Coalface is a reminder that communities and trade unions can work together to campaign for a better society and we need to remember those lessons now.

I am an activist and writer. My interests include women, class, culture and history. From an Irish in Britain background I am a republican and socialist. All my life I have been involved in community and trade union politics and I believe it is only through grass roots politics that we will get a better society. This is reflected in my writing, in my book Northern ReSisters Conversations with Radical Women and my involvement in the Mary Quaile Club. .If you want to contact me please use my gmail which is lipsticksocialist636
View all posts by lipstick socialist →
This entry was posted in book review, feminism, human rights, interesting blog, labour history, political women, Socialism, Socialist Feminism, trade unions, women and tagged Arthur Scargill, catherine paton hall, miners strike 1984/5, miners wives support group, Nottinghamshire miners.. Bookmark the permalink.

1 Response to Book review: At the Coalface; My life as a Miner’s Wife by Catherine Paton Black