Posted on August 30, 2012 by lipstick socialist

It is one of the sunniest days in Manchester and fifty noisy people are gathered outside the Atos centre at Albert Bridge House. Many people have walking sticks and a few are in wheelchairs and they have all gathered to tell Atos that they are not fit to sponsor the Paralympics. Atos is the organisation that the Government are using to kick 500,000 disabled people off their benefits. 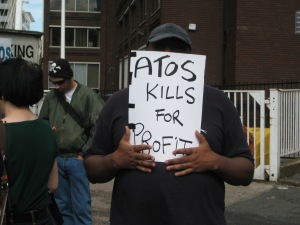 After blocking the road the protesters then marched around the city centre chanting ‘David Cameron hear us shout, time to kick Atos out!

The Manchester demonstration is part of a week long activities organised by Disabled People Against the Cuts to highlight the contradictions of the Government accepting Atos as a sponsor for the Paralympics games. The media are also bombarding us with positive images of Paralympic athletes whilst the reality for most disabled people is that their lives and livelihood is being threatened by cuts in their benefits. DPAC have joined with the Manchester Coalition Against the Cuts to organise this and several other events.

Two of the protestors shared their stories with me. Reverend Paul walks with a stick because he has a spinal disease and has a terminal illness.
“They, Atos, have passed me fit for work twice. I have appealed twice and won. But whilst you are appealing you are only paid basic benefits, which means I got £33 per week for six months whilst waiting to get to my appeal. The second time I had to wait for 9 months. Even though, once you win your appeal, you get the backdated benefits, it means that during that period your bills are not getting paid and you are living on the breadline”.
Reverend Paul, unlike some other activists believes that the whole WCA system should be scrapped. “I don’t think it can be improved. Why don’t they believe the medical reports from our doctors and consultants.”

Colin (known as Criquaer on twitter) is in a wheelchair and his motivation to attend the demo was for his friends;
“I came here on behalf of friends who have been treated very badly by Atos assessors who don’t take into consideration the whole of our illnesses. I am petrified about that brown envelope coming in through the door from Atos calling me in for a “fit for work” assessment. I have had to go back on anxiety tablets because I am that worried. Its got everyone het up because of the stories you hear and the disrespectful way that they have treated people.” 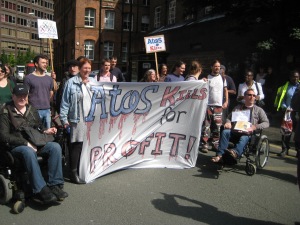 Many of the speeches by disabled people echoed the comments of Paul and Colin. Not just the fear of being called in for assessment but also the reality that even if you win your appeal you can be then called back in again for another assessment. As DPAC says “Atos continues to devastate people’s lives. Many have committed suicide because of its testing programme, and over 1,000 people have died of their illnesses soon after being found ‘fit for work’”.
It was not just about disabled activists detailing horrendous experiences but also in showing how claimants could challenge and win their appeals. One of the speakers provided information on useful websites and strategies that claimants have used to challenge the system.

On previous demos the PCS who represent administrative staff have provided speakers but as Mark Krantz of MCAC explained; “These union members are under tremendous pressure and its difficult for them to speak out publicly. But it is important for claimants and union members to act together to oppose this barbaric system. “. Some union members did come out and sign the petition.

PCS, the main union, issued a statement in support of the action whilst at the same time expressing their own perspective .
“The members we represent in ATOS offices are not responsible for the failings of the government’s unfair welfare policy which victimises people who are not able to work through no fault of their own. They deserve your support, consideration and respect during what is a difficult time for any worker trying to deliver public services.”

Tuesday’s event is only one part of a series of activities being organised by DPAC and their supporters during the Paralympics. Please check their website for daily updates.See

I am an activist and writer. My interests include women, class, culture and history. From an Irish in Britain background I am a republican and socialist. All my life I have been involved in community and trade union politics and I believe it is only through grass roots politics that we will get a better society. This is reflected in my writing, in my book Northern ReSisters Conversations with Radical Women and my involvement in the Mary Quaile Club. .If you want to contact me please use my gmail which is lipsticksocialist636
View all posts by lipstick socialist →
This entry was posted in anti-cuts, disabled people's campaigns, human rights, Manchester, trade unions and tagged david cameron, manchester Coalition Against The Cuts, paralympics. Bookmark the permalink.