Posted on August 23, 2012 by lipstick socialist 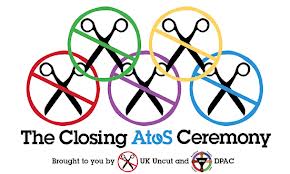 Next week Disabled People Against Cuts (DPAC), are organising a week of action to coincide with the Paralympics, they are calling it “the Atos Games”. Atos is a sponsor of the Paralympics and is the main contractor for the government in its drive to cut disabled people’s benefits. Groups across the country are coming together to protest at Atos medical assessment centres. Locally it is the Manchester Coalition Against the Cuts( MCAC), who are backing DPAC at its protest on Tuesday 28 August at 12, outside Albert Bridge House.

Disabled people get a raw deal in our society. But the Paralympics being staged in this country has meant that the mass media coverage has produced some very positive images that get beyond the usual stereotype of what it means to be disabled.

But the reality for most disabled people is not so positive. The Con/Dems, in their pursuit of benefit cuts, have targeted one of the most vulnerable groups in society; the disabled. Openly they have pursued a policy of driving 500,000 disabled people off their benefits . The company Atos ,who conduct the Work Capability Assessments, have been exposed as the government’s accomplice in reducing the numbers of people claiming disability benefits. The government has admitted that the tests are “flawed” whilst the British Medical Association have demanded that they should “end immediately.”

The fighback against the cuts is being led by DPAC . It was set up after the 3 October 2011 mass demo against cuts in Birmingham. An action group called Disabled Peoples’ Protest led the protest, which was the first large scale opposition to the cuts and their effects on disabled people.

DPAC co-founders are the original Disabled Peoples’ Protest organisers. It believes;
“that disabled people should have full human rights and equality. It is for everyone that refuses to accept that any country can destroy the lives of people just because they are or become disabled or sick. It is for everyone against government austerity measures which target the poor, while leaving the wealthy unscathed. It is for everyone who refuses to stay silent about the injustices delivered by wealthy politicians on ordinary people and their lives”.
They have, through their campaigning , highlighted the devastating effects of Atos, and exposing the reality that people have taken their own lives rather the face the severe hardship and poverty that comes with being passed “fit-for-work” by Atos. More than 1,000 people have died of their illnesses shortly after being passed “fit for Work”. DPAC’s website is a forum where disabled people can exchange information, gain support and take part in activities.

Ironically, or maybe not, Atos, is one of the lead sponsors of the Paralympics. They have not just been given a lucrative sponsorship deal but Government has now rewarded them with a £400m contract to carry out assessments for Personal Independence Payments that will take over from Disability Living Allowance in 2013. DPAC say “Atos are unfit to sponsor our Sports”.

Mark Krantz of MCAC says, “we are calling on people to join us on Tuesday, because we want to expose the brutality of the system that Atos is operating. We also want to bring together claimants and the members of the PCS who are involved in the system”.

A spokesperson for PCS commented; “We wholeheartedly supports the campaign’s aim, which is to fight back against the unfair workplace capability assessments. The ‘fit-for-work’ tests have led to severely ill and disabled people being forced off the benefits system.”

“Any PCS members wanting to support the week of action are encouraged to do so. The members we represent in ATOS offices are not responsible for the failings of the government’s unfair welfare policy which victimises people who are not able to work through no fault of their own. They deserve your support, consideration and respect during what is a difficult time for any worker trying to deliver public service.”

I am an activist and writer. My interests include women, class, culture and history. From an Irish in Britain background I am a republican and socialist. All my life I have been involved in community and trade union politics and I believe it is only through grass roots politics that we will get a better society. This is reflected in my writing, in my book Northern ReSisters Conversations with Radical Women and my involvement in the Mary Quaile Club. .If you want to contact me please use my gmail which is lipsticksocialist636
View all posts by lipstick socialist →
This entry was posted in anti-cuts, human rights, Manchester, trade unions and tagged ATOS, disabled people, DPAC, paralympics, PCS. Bookmark the permalink.