Posted on August 16, 2012 by lipstick socialist

Mary’s life and political activity shows us why unions are important for women and is an example of the role that Irish people have played in the British trade union movement in this country.

She was born in Dublin; her father was secretary of the Irish Brick and Stonemakers Union. In 1908 she came to Manchester and got a job at the Socialist Clarion Café in Market Street, Manchester. She organised a Café Workers’ Union in Manchester and became its secretary. This was the beginning of a lifetime career as a trade union activist.

In 1911 Mary was appointed as Assistant Organiser to support Mrs Aldridge at the Manchester and Salford Women’s Trades Council. The Council had been established in February 1895 at a meeting in Manchester Town Hall with a view to promoting trade unionism amongst women workers.

By 1914 Mary was the organising secretary for the Council as Mrs. Aldridge had left. She opposed the First World War and belonged to the No Conscription Fellowship. In April 1919 the two Manchester women’s trades councils merged with the Manchester and Salford Trades Council (with Sarah Dickenson appointed Women’s Organiser) and that same year Mary took up a new post as National Women’s Organiser for the Dock, Wharf and Riverside Workers’ Union, which eventually joined the Transport and General Workers Union in 1922. This was Britain’s largest union.

She quickly became prominent in her union, standing for election to the General Council of the Trades Union Congress in 1923 when she came third in the ballot behind Margaret Bondfield and Julia Varley. When Ramsay MacDonald appointed Margaret Bondfield to a job in the first Labour Cabinet as Minister for Employment in January 1924 she resigned from the General Council and Mary took her place as the runner-up, attending her first meeting in March.

Mary was a member of the TUC Women Workers Group, which was looking at the organisation of women in trade unions, following a resolution at the TUC the previous year. In May 1924 the TUC sent out a letter to all unions stating that in their opinion “much could be done to further the trade union organisation of women if all men Trade Unionists would do their utmost to get their wives and daughters to see the importance of becoming trade unionists themselves.”

In 1925 Mary led the Women’s Trade Union Delegation to Russia. She said that “The visit of six working women to Russia was a milestone on the road to international Trade Union unity”. This banner was presented to the British women by the Soviet trade unions.(TUC Archive) 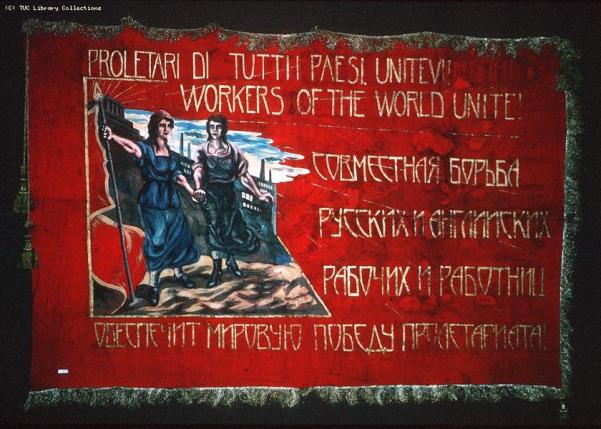 Mary attended the TUC Women’s Conference, held on 20th March 1925, in Leicester, which discussed ways of recruiting more women workers and called on stronger trade unions to come to the aid of the weak, blaming past Executive Councils and union officials for not having made special efforts to organise women.

Later that year at Congress Mary spoke in the discussion on women’s organisation within the TUC, stating her belief that it was necessary to have a women’s group “because of the work that had been done not only in organising the women but in educating them in their responsibilities, and the part they had to take in their own trade union movement”. Mary was elected again in 1925 to the General Council. She was now one of the most prominent women trade unionists in Britain.

The Leicester conference resulted in the TUC launching a recruitment drive for women in the early months of 1926 with Manchester and Salford as its first target. Mary spoke alongside Margaret Bondfield and Walter Citrine, the new TUC General Secretary.

In May 1926 the TUC called the General Strike in support of the Miners’ Federation of Great Britain, whose members had been locked out by the coal-owners. The strike was very solid in Manchester and Mary spoke at a mass meeting in Platt Fields, attended by many thousands on Saturday 8th May. Despite the magnificent response of trade unionists across Britain the TUC called off the General Strike unilaterally after ten days without consulting the miners, leaving them to fight on alone until starvation forced them back on the owners’ terms in the autumn.

In September Mary attended the First Annual TUC Women’s Conference in Bournemouth. She did not stand for the General Council in 1926 and the following year returned to Manchester, living in Levenshulme, and again took office as secretary of the Women’s Group on the Trades Council. In 1935 she was elected Vice-President of the Trades Council, the first woman officer of the council, and from 1936 to 1958 she acted as Treasurer. In her later years she was awarded the TUC Silver Badge for Trades Council Officers at a reception at Belle Vue attended by some four thousand people.

Writer and socialist, Jim Allen, in his film Days of Hope, which described this period leading up to the General Strike of 1926, featured a woman, trade unionist called Mary. Given Jim’s in-depth knowledge of labour history I believe he was referring to Mary Quaile.

I am an activist and writer. My interests include women, class, culture and history. From an Irish in Britain background I am a republican and socialist. All my life I have been involved in community and trade union politics and I believe it is only through grass roots politics that we will get a better society. This is reflected in my writing, in my book Northern ReSisters Conversations with Radical Women and my involvement in the Mary Quaile Club. .If you want to contact me please use my gmail which is lipsticksocialist636
View all posts by lipstick socialist →
This entry was posted in Communism, education, human rights, International Women's Day, labour history, Manchester, Socialism, Socialist Feminism, trade unions, women and tagged days of hope, International Women's Day, Jim Allen, mary quaile, soviet trade unions. Bookmark the permalink.