Posted on June 7, 2012 by lipstick socialist 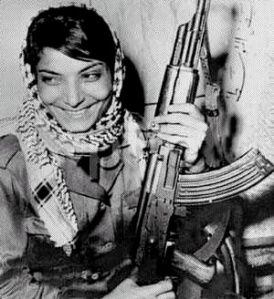 Reading this book reminded me of another icon in my own community, Bernadette Devlin McAliskey. Like Leila, she grew up in an occupied country and has spent her life campaigning for a democratic and just solution to the division of Ireland. She has faced assassination, censorship and marginalisation in the Irish political system. She became an hero to the Irish community in the 60s when families,such as mine, across Britain watched (and cheered) when she took to the barricades to defend her community against the massed ranks of the RUC and British Army.

About the same time Leila Khaled was hijacking a plane from Rome to Damascus where the plane nose was blown up. She made the world headlines because she was a young attractive woman involved in militant action. This book is fascinating because the author weaves together the history of the Palestinians with the story of a woman and her struggle not just as a soldier but as a wife, mother, teacher and campaigner and activist in the Palestinian National Council and a leader in the General Union of Palestinian Women.

Sarah wrote the book after a series of interviews with Leila in Amman in 2008. She tells Leila’s story but also says that she wants “to explore some of the issues and passions she arouses; how do militants whose careers start with violent action end them in the arena of political negotiation and discussion? Why, and how, do people – especially women – decide to follow the path of armed struggle and what do they gain and lose.”

Leila Khaled was born to a lower middle class family in Haifa on 9 April 1944. By the age of four her family, and most other Palestinians, had been forced to leave the city by Israeli armed groups, including the Irgun and Haganah. Their escape to the Lebanon made a deep imprint on her life, “At home, Paestinians families were in a miserable state.Whatever we asked for was rejected by our parents, especially our mother as our father wasn’t there. Whenever we asked why? The answer was; because we ‘are not in Palestine’. All the deprivation we lived in, was because ‘we are not in Palestine.’ Like many Palestinian, she was politicised by her forced exile and a return to her homeland was, for her, the crucial issue in identity and nationhood.

As children do in war zones she learnt her politics early. At the age of 14, when conflict broke out in the Lebanon in the late 1950s, she was delivering bread to fighters in the front line.She then became part of the Arab Nationalist Movement , which sought to unite all Arab countries against the US and European imperialism. By 1967 she had joined the Popular Front for the Liberation of Palestine which reflected the different conditions on the Arab countries and had a more decentralised structure to take this into account.

The PFLP is a Marxist organisation, influenced by the experiences of its own militants and the writings of Che Guevara and philospher, Frantz Fanon. Spurred on by the defeat of Arab armies in the Six Day War, in 1967 Leila decided to become a fighter in the PFLP. After military training she went onto play a major role in bringing the Palestinian struggle to the attention of the world through the tactic of plane hijackings. It was a path that led to her becoming a worldwide public figure, but one of the repercussions of this notoriety was the assassination of her sister and her sister’s fiance in 1976 in Beirut. Leila was the intended target. as she was part of the armed resistance which was defending Palestinian refugee camps from the Lebanese army and Christian militias.

From the late 70s she became involved with women’s organisations as a PFLP’s representative in the General Union of Palestinian Women. Her interest and commitment to women’s politics has been influenced by her own experiences, not just as a political figure but as a wife and mother. As she says; “all those years, until 1982 to 1992 I was based in Syria. I had to balance work and the children.It was the same for other women comrades, so we began to discuss the issues of women comrades who became mothers.. but what about the men? So we took a decision that all comrades were responsible for caring for the children.”

Leila now lives in Jordan and is still in the PFLP, although left wing organisations have been marginalised in Palestinian politics. The decline of the left has been to the advantage of fundamentalist parties such as Hamas who are the main party in Palestine.Leila is still an activist, as well as representative for the PFLP, taking part in international conferences including the World Social Forum which she sees as important in building solidarity across the world.This has led to some interesting networking, including a PFLP statement of solidarity to striking Italian metalworkers in February 2011 saying; “It’s time to change,it’s time to revolt against all kinds of oppression and corruption. It’s time to establish a new system based on social justice,freedom of speech and expression.”

Leila Khaled has been an activist in Palestinian politics for over fifty years and in this book there are many interesting reflections on her past activism as well as the rise of Hamas, womens role in politics and controversial subjects such as suicide bombings. Sarah Irving has written a thought provoking and insightful book for all of us wanting to become involved in politics whether at a local or national level.

I am an activist and writer. My interests include women, class, culture and history. From an Irish in Britain background I am a republican and socialist. All my life I have been involved in community and trade union politics and I believe it is only through grass roots politics that we will get a better society. This is reflected in my writing, in my book Northern ReSisters Conversations with Radical Women and my involvement in the Mary Quaile Club. .If you want to contact me please use my gmail which is lipsticksocialist636
View all posts by lipstick socialist →
This entry was posted in biography, book review, human rights, Ireland, Middle East, Palestine, Socialism, women and tagged Bernadette McAliskey, biography, Leila khaled, Sarah Irving. Bookmark the permalink.