Sheila Rowbotham; a dreamer of a new day 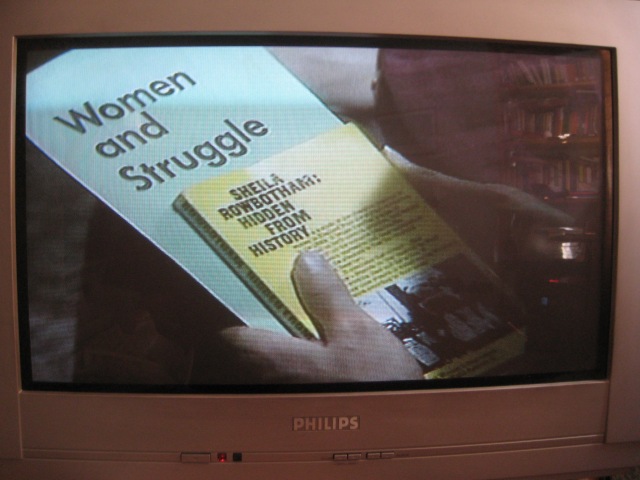 Watching the DVD of Trevor Griffith’s 1976 TV drama Bill Brand reminded me how exciting and important the 1970s were for the Left. Brand (played by Jack Shepherd) is a newly elected Labour MP from a northern constituency. Apart from trying to find socialism within the Parliamentary Labour Party, he also struggles with his own relationships with his wife, Miriam, and his girlfriend: feminist and activist, Alex. I kept hearing the mantra “the personal is political” whilst watching this part of his life unravel. In one episode we see Brand with a copy of Sheila Rowbotham’s Hidden from History, reminding me of how important this book was then.

Published in 1973, Sheila gave the Left a book on socialist feminist history which responded to, and was part of, an awakening of consciousness about the role that women had played in the history of capitalism. As Sheila said in her introduction, “This book comes very directly from a political movement. The decision to work over some of the territory I had gone through and find out more came out of discussions in women’s liberation and on the left about the situation of women in contemporary capitalism.” Her book challenged traditional history, written by men, which had excluded women, and it encouraged other women to research and write about women’s history.

Thirty years later in her new book, Dreamers of a New Day: Women Who Invented the Twentieth Century, Sheila wrote that it rests “on the extraordinary growth of interest in women’s and gender history which has occurred since the emergence of the women’s movement in the late 1960s” In this book she looks at the period from the  1880s to the First World War,  and celebrates what women achieved during that period, not just in Britain, but also the USA.

In 2012 women’s lives are getting worse as we take the burden of public sector job cuts and cuts in benefits and services, so it is good to look back and see how other women during this period got together to transform their lives and, most importantly, they believed that it was possible to change society – and did something about it!
The period that Sheila writes about was an exciting time with many technological and scientific discoveries. In an era of massive changes, nationally and globally, women challenged their own unequal position in society and their historic subordination to men, and also joined with other groups to oppose the social and economic injustice of the societies they were living in.

Dreamers is an inspiring book to read because of the breadth of its content: its subjects ranging from campaigns on birth control, family and work to consumer power and  the struggles of American black women. We hear the stories of immigrant women in the New York Triangle Shirtwaist Factory,  and union member Pauline Newman, who, like many other women in factories, had worked there from the age of 12 years and learnt the importance of trade unions and friendships at work. ”You are no longer a stranger and alone.” Sadly, in 1911, 146 of these workers were forced to jump to their death as a factory fire engulfed their workshop. The factory owners had resisted their union’s attempts to stop them locking in the young women whilst at work.

Today we live in a highly individualised society where people find it difficult to organise together but Sheila reminds us of past times, where cities such as Glasgow were highly politicised. Women played a key role there in the rent strike of 1915 and the network of radical Sunday Schools, newspapers and Clarion organisations which meant that activists, including socialists and feminists, could organise in their workplaces and neighbourhoods to bring less political people into a broad alliance to challenge injustices such as rent rises.

Dreamers shows us that we do not need to just dream about challenging a right wing government, but, like the women in this book, we can get together with like-minded women and men to make a better world.

I am an activist and writer. My interests include women, class, culture and history. From an Irish in Britain background I am a republican and socialist. All my life I have been involved in community and trade union politics and I believe it is only through grass roots politics that we will get a better society. This is reflected in my writing, in my book Northern ReSisters Conversations with Radical Women and my involvement in the Mary Quaile Club. I am a member of the Manchester and Salford National Union of Journalists.If you want to contact me please use my gmail which is lipsticksocialist636
View all posts by lipstick socialist →
This entry was posted in anti-cuts, book review, Socialist Feminism, women and tagged bill brand, Dreamers of a New Day: Women Who Invented the Twentieth Century socialist-feminism, Frow lecture, Hidden from history, sheila rowbotham, Working Class Movement Library. Bookmark the permalink.