Posted on February 8, 2012 by lipstick socialist 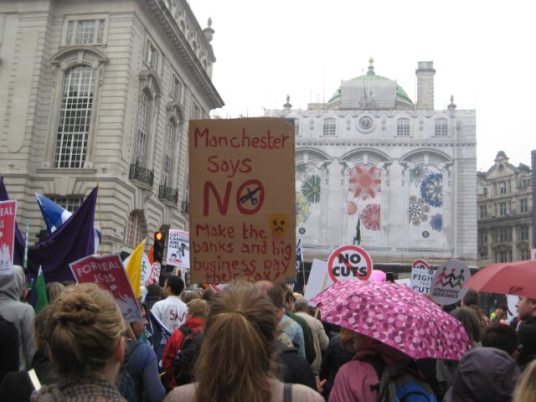 Manchester protests against the cuts!

What do you do on a Saturday? Last week as I trudged through the snow in central Manchester  I watched other people sat in bars and cafes with their friends laughing, bumped into people with bags of shopping and wondered what I was doing.  I walked into the Friends Meeting House feeling cold but soon warmed up with the good feeling from the people present. The main room was filled with people of all ages who  were there to review the first year of their organisation, the  Manchester Coalition Against the Cuts, MCAC,  which grew  out  of a meeting organised by Manchester Trades Union  Council, (founded 1866 , by the way). MTUC  brings trade unions together to campaign on common issues such as pensions and the health service.   MCAC brings together  activists, trade unionists, students and pensioners  and  “initiates protest,  publicises actions and links up campaigns against cuts to services and to jobs and conditions in the City”.

Last time there was a Tory government  in 1979 it took about 18 months before trade unions and the left started campaigning seriously against their cuts. This time is  different. The scale of the cuts, the onslaught against the public sector,  and the growing national and international recession is affecting everyone. One year on it was wonderful to see the progress of one local organisation. MCAC is a coalition, unlike the Con-Dem coalition  it aims to promote the importance of public services to everyone and to draw the link between the excesses of bankers and  large corporations  and the ideology of the cuts programme.

Children’s author, Alan  Gibbons,  spoke about  his campaign to “Save the Book” which started in 2008.  He said that he had gone through all the democratic process of lobbying at local and national level  etc  but it was direct action, including read-ins at libraries,  that had drawn people into the campaigns, and put pressure on both local and national politicians to reverse their  library cuts agenda.  Other speakers repeated the same message that “naming and shaming” the scissor people could challenge the agenda of justifying  the destruction of  services.

Two young women from the local Uk Uncut campaign I found particularly inspiring. Amanda and Eve spoke about their own journey to political activism. It might  seems  fluffy and not very political but they are reaching out to the non involved (as yet) person in the street.  Their aim is to highlight how large organisations from the banks to large retailers such as TopShop/BHS are avoiding paying taxes which amounts to £12bn per year.  They want  to lay bare  the political nature of the cuts agenda; that this is still a rich country and that it’s the poor who are being made to pay for the so called “budget deficit”.

It could have been a depressing meeting as we were told about yet more cuts being planned across mental  health services, the BBC, the Fire Service etc. But instead it was heartening for me  to see not only the amount of marches, lobbies, rallies and meetings  that MCAC had organised but also the way in which they had brought together so many diverse people and campaigns, not only brought together but supported, encouraged and marched with to produce successful campaigns,  and to prove that people getting together can make a difference.

Another date for your diary is 15/2/2012 at 10am to lobby Manchester City Council Executive Committee as the decision about the future of Sure Start and childcare in Manchester will be made at that meeting.

I am an activist and writer. My interests include women, class, culture and history. From an Irish in Britain background I am a republican and socialist. All my life I have been involved in community and trade union politics and I believe it is only through grass roots politics that we will get a better society. This is reflected in my writing, in my book Northern ReSisters Conversations with Radical Women and my involvement in the Mary Quaile Club. .If you want to contact me please use my gmail which is lipsticksocialist636
View all posts by lipstick socialist →
This entry was posted in anti-cuts, Manchester, Socialism, trade unions and tagged anti-cuts, Manchester, manchester Coalition Against The Cuts, Manchester Trades Council, poltical badges, Socialism, trade unionist, UK uncut, women. Bookmark the permalink.